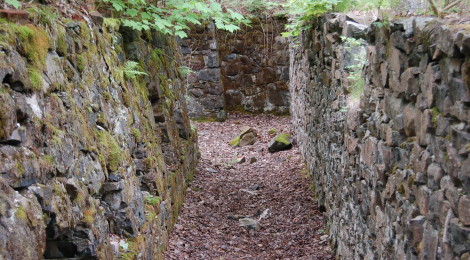 10 Michigan Abandoned Places and Ruins Worth Checking Out, Part 3 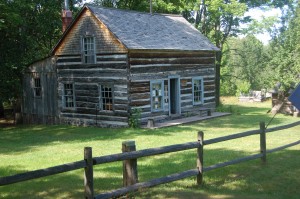 Abandoned places and ruins continue to fascinate travelers, as they provide a window into the past as well as some amazing pictures. Many Michigan abandoned places and ruins sites are easy to find and visit, and we have been fortunate enough to have the chance to see many of them in person. While we are always looking to explore sites we haven’t yet been to, we decided to take a minute to highlight some of the amazing ones we have been to in this list. In January we shared our fist list of 10 Michigan Abandoned Places and Ruins Worth Checking Out and then we shared 10 More Michigan Abandoned Places and Ruins Worth Checking Out, sharing pictures from our visits and letting you know how you can visit too. Now we return with 10 Michigan Abandoned Places and Ruins Worth Checking Out: Part 3 featuring 10 more sites. When visiting any of these sites it is important to respect private property and to “leave nothing but footprints, take nothing but pictures.” We hope you enjoy this list and we hope to be back soon with a list of 10 more incredible sites. 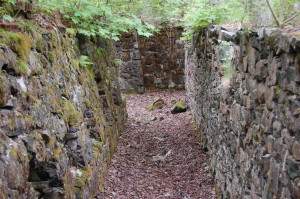 Arnold Mine Ruins (Eagle Harbor) – If you’ve ever stopped to check out Jacobs Falls or The Jampot in Eagle Harbor, you’ve been very close to the ruins of the Arnold Mine. The monks of the Holy Transfiguration Skete – Society of St. John have cleaned up the ruins site up the hill and regularly keep them maintained. The trail can be reached by taking the 4th St. east from Eagle River, then bear left as it turns into Garden City Rd. (total trip is about three miles from M-26). 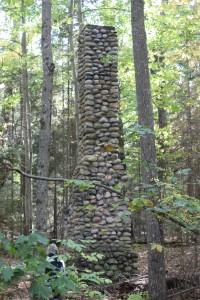 Bell Ghost Town (Besser Natural Area, Presque Isle County) – From Visitalpena.com: “A serene one-mile foot trail leads through an area formerly inhabited by the people of the Village of Bell. Some remains of buildings, a virgin stand of white pine trees, a lagoon and beautiful sandy beach beacon for adventure. The shipwreck, Portland, lies just off the coast to the north near Bell Bay.” The Besser Natural Area is reached by taking U.S. 23 north from Alpena for 14 miles, then heading east on Grand Lake Rd. After three miles look for Besser Bell Bay Rd. on the right and follow the signs. 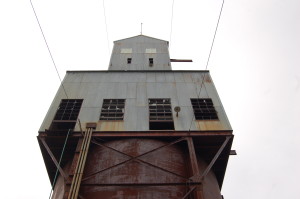 Centennial Mine No. 6 Shaft (north of Calumet) – You’ll see the mine shaft towering above the trees as you head north on M-26/U.S. 41 near Calumet. Look for a road marked for “Centennial #6″ on the left between Mine Rd. and Wolverine St. There is an informational plaque on site that reads: “Centennial Mine was the last of the shafts near Calumet to be abandoned and fill with water. Centennial mined the conglomerate ore body near the C & H Conglomerate Lode following the dipping rock layers deep into the earth thousands of feet from the surface.” The history of this operation dates back to the 1870s, and it was even re-activated in the 1970s in hopes of finding profits once again – though that did not materialize. Please respect the current owners by not removing any specimens from the area and following the rule of “take only pictures, leave only footprints.” 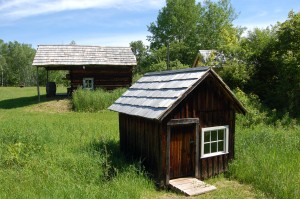 Hanka Homestead (north of Baraga) – This restored homestead is one of the Keweenaw Heritage Sites, and they provide the following information: “Mining provided job security, but many Finnish immigrants longed for their former farming lifestyle. Some homesteaded on marginal farm lands known as stump farms. It was a difficult but self-reliant life. Volunteers provide guided tours of the farm, restored to its 1920s appearance.” You can find the Hanka Homestead about six miles west of U.S. 41 off of Tower Rd. 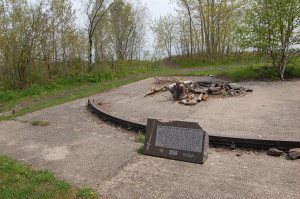 Keweenaw Rocket Range (Copper Harbor) – It take a bit of work and traveling some rough roads to get to the Keweenaw Rocket Range, but it is a trip worth taking. This was one of six sites in North America where NASA launched rockets to collect meteorological data. This site had a short life (1964-1971) and little remains of it now. Head to the end of U.S. 41 in Copper Harbor, then travel a few miles on Mandan Rd. Take High Rock Bay Rd. on the left and follow it across a small stream and around Schlatter Lake. Take the Rocket Range Trail which is the left fork and proceed to the site. 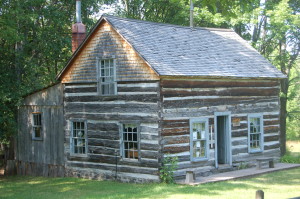 Old Victoria (Rockland, Ontonagon County) – The “ghost town” of Old Victoria has been restored in a similar way to the Hanka Homestead, and on most summer days there will be someone on hand to help guide you through the site. Victoria was one of the early copper mine locations and is close to where the famous Ontonagon boulder was found. The town grew up around the mine, and when the mine stopped producing the town didn’t last much longer. A short drive down the road leads to the Victoria Dam and waterfall. You’ll find Old Victoria on Victoria Dam Rd., about four miles south of M-26/U.S. 45 in Rockland. 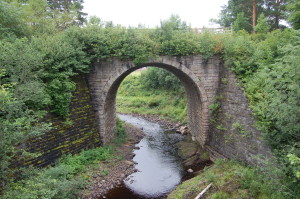 Ramsay Keystone Bridge (Gogebic County between Bessemer and Wakefield) – One of the state’s most historically significant bridges, the Ramsay Keystone Bridge dates back to the 1890s. It is one of the largest stone arch bridges constructed in Michigan and is in great shape for its age. It used to carry the Chicago and Northwestern Railroad over the Black River here, but those days of activity ended long ago. From Us-2 between Bessemer and Wakefield, head south on Ramsay Rd. and stay on it as it turns into Mill St. Turn left on Keystone St. and follow it to a parking area which you will be able to see the bridge from. 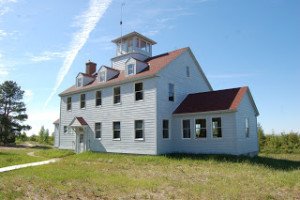 Vermilion Life Saving Station (west of Paradise on Lake Superior) – There were once four life saving stations on the Lake Superior coast in the eastern U.P., but on Vermilion Point Life Saving Station remains standing today. Only a few buildings remain here, but thanks to the area now being part of a nature preserve there shouldn’t be any more loss of historic buildings. The station operated from the 1870s to the 1940s, and had fallen into rough shape in the decades that followed. Now the station is open to the public for quiet outdoor recreation and the beach near here has become an important habitat for piping plovers. To get to the Vermilion Life Saving Station, take Whitefish Point Rd. north from Paradise, then head west on W. Vermilion Rd. Stay on it as the road turns to a well-maintained two track, then head north on Vermilion Rd. when the road splits (signs will be marked for the Little Traverse Conservancy). 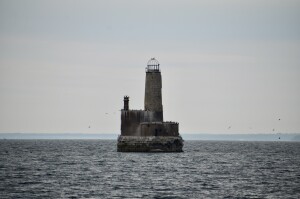 Waugoshance Lighthouse (Lake Michigan) – You’ll need a private boat or a Shepler’s Lighthouse Cruise to view what remains of this lighthouse in Lake Michigan. The Waugoshance Shoal Lighthouse is 74 feet tall and has a unique birdcage lantern room design. It was first lit in 1851 and served until 1912. Rumored to be haunted, this lighthouse has quite the interesting history. During World War II it was used as a target for Navy bombing practice from planes above Lake Michigan. Restoration efforts spanned three decades but were disbanded recently, and it is amazing that this structure is still standing. We consider this to be Michigan’s most endangered lighthouse and know it could fall into the lake any time. 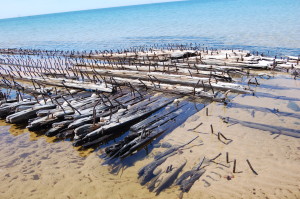 Shipwrecks of Au Sable Point (Pictured Rocks National Lakeshore) – The 1.5 mile hike from the Hurricane River campground to the Au Sable Point Lighthouse passes by three shipwrecks in the shallow waters of Lake Superior. Signs point the way and refer to the wrecks as the Mary Jarecki (200 ft. wooden steam barge), the Sitka (272 ft. wooden bulk steamer), and the Gale Staples (277 ft. wooden freight steamer). The wooden beams and protruding metal spikes here are a sobering reminder of exactly why a lighthouse was needed to keep vessels away from the reef. Visibility of these shipwrecks may change with water levels – we’ve been there at times when most of the wreckage was on dry land as well as at times that we were able to kayak over them. The Hurricane River Campground is located on H-58, 12 miles west of Grand Marais.