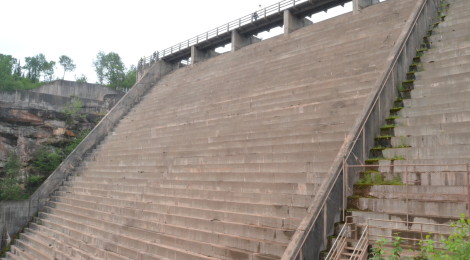 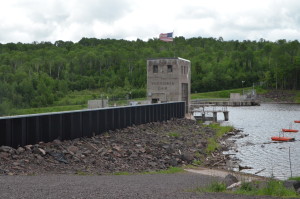 About a mile down the road from the Old Victoria Historical Site (a restored mining village) is UPPCO’s Victoria Dam and the seasonal waterfall that forms in the dam’s overflow channel. The dam and hydroelectric plant on the west branch of the Ontonagon River date back to 1931, when they began to generate power for the area’s mining and lumbering operations. 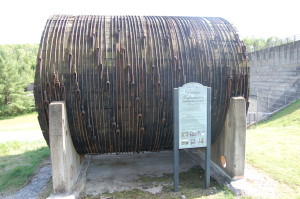 The dam is quite a wonder to see in person, especially when you consider its remote location and how much extra effort would have been required to get building materials to the site. To generate power at this site, water from the diversion dam flows through the intake into a wooden pipeline to the turbines. The force of the water passing through the blades drives the turbine and generators to produce electricity. A section of the second pipeline (late 1950s), made with Douglas fir, can be seen on display in front of the dam. 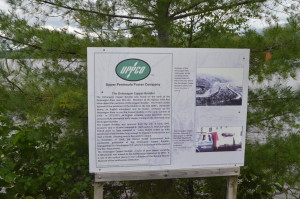 Near here is where the infamous Ontonagon Boulder was found. A sign placed near the reservoir by UPPCO details how this massive slab of copper was the inspiration for future mining efforts. “The Ontonagon Copper Boulder was found on the bank of the Ontonagon River near this site. Members of the Ojibwa Tribe first knew about the existence of the Copper Boulder. The French Jesuits learned of the existence of the boulder in the late 1600s. Alexander Henry, an English adventurer and fur trader, ventured up the Ontonagon River to see the Copper Boulder in the early summer of 1766. In 1771-72, an English company under Alexander Henry unsuccessfully attempted early copper mining on the river bank near the Copper Boulder. The Copper Boulder was removed from the site in early 1843. Accounts vary as to who removed it. Both James K. Paul and Julius Eldred claim to have removed it. Julius Eldred ended up with possession of the boulder long enough to display it in Detroit for less than a month, charging twenty-five cents to view it. In November of 1843, the United States Government took permanent possession of the Ontonagon Copper Boulder, transporting it to Washington, D.C., where it was placed in the yard of the War Department. The Ontonagon Copper Boulder, a mass of copper weighting 3,708 pounds was moved to the Smithsonian Institution in 1858. It wis one of the earliest pieces in the collection of the Natural History Museum of the Smithsonian Institution.” 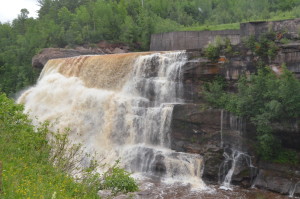 The waterfall here is best described as seasonal, since it comes from the dam’s overflow channel. Spring is the best time to visit for guaranteed water flow, though we were lucky enough to catch it after a few days of heavy rain in June 2017. When flowing at full force, Victoria Dam Falls is roughly 60 feet wide and 40 feet tall. 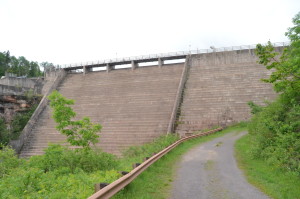 Directions: From Rockland (US-45), head west on Victoria Dam Rd. (follow signs for Old Victoria). In roughly three miles you will pass over the Ontonagon River, and shortly after that you will see the Old Victoria site. Continue straight from there, and proceed straight (there is a UPPCO sign for the dam) when another road intersects on the right. From here it is less than a half mile to a parking area for the dam and waterfall.