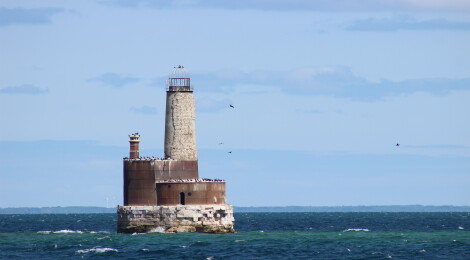 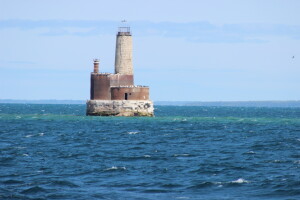 The Waugoshance Lighthouse in the Straits of Mackinac has long been one of Michigan’s most endangered lighthouses. Deactivated and abandoned in 1912, the lighthouse has endured years decades of severe weather and countless harsh winters; it was even used as a target for bombing practice during World War II. While the Waugoshance lighthouse certainly wasn’t going to win any awards for its looks, it has always held a special place in the hearts of lighthouse lovers for continuing to stand against all odds. With some sad news shared by the (now former) Waugoshance Lighthouse Preservation Society earlier this week, it seems that the lighthouse could soon be lost to Lake Michigan. It certainly won’t be the first Michigan lighthouse to be lost, but it will be one of the most tragic examples of preservation efforts not being enough to combat the forces of nature combined with government red tape. While Fourteen Mile Point Lighthouse, Gull Rock Lighthouse, Squaw Island Lighthouse, Poverty Island Lighthouse and others are still vulnerable, there is now little doubt that no other lighthouse in Michigan is in as much danger as Waugoshance. If you haven’t been on one before, we recommend a Shepler’s Westbound Lighthouse Cruise this year so you can see the Waugoshance Lighthouse for yourself before it is lost forever. 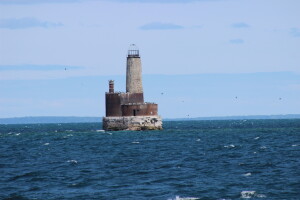 In a Facebook post, former WLPS President Chris West shared the news that the 501c-3 non-profit was being dissolved, as a combination of high expense to save the lighthouse and bureaucratic red tape will now prevent the saving of the lighthouse and possibly the preservation of any part of it in a museum or safe place. Read the full post below:

We were fortunate to visit the Waugoshance lighthouse on several occasions, and we hoe to have a chance to get back soon. You can read our older post about the lighthouse here, check out old videos of the bombing runs on YouTube, find out about its rumored haunting as well as Michigan’s other haunted ihthouses, and read a detailed dive into its history on the late Terry Pepper’s Seeing the Light website. The WLPS site will be preserved as a historical record, be sure to head over there to see rare photographs of the lighthouse from over the years.