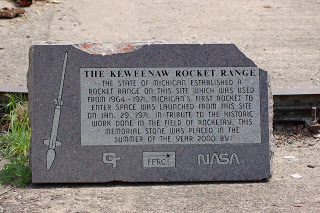 For those who have the time and the patience (and either a good mountain bike, four-wheeler or high clearance vehicle), the Keweenaw Rocket Range is an interesting side trip while in the Copper Harbor area. I first found information about the former launch site while doing some research for an upcoming Lake Superior Circle Tour, and was immediately interested. Most have no idea this place exists, and if you make it out to the shoreline you’re rewarded with some amazing views that only a handful of people see each year. Here’s a look at my June 2013 visit, with directions at the bottom of the page.

There isn’t much left to the site itself, and the highlight is the marble plaque explaining the significance of this site. The text reads, “The State of Michigan established a rocket range on this site which was used from 1964-1971. Michigan’s first rocket to enter space was launched from this site on Jan. 29, 1971. In tribute to the historic work done in the field of rocketry, this memorial stone was placed in the summer of the year 2000 by NASA.” Pretty cool, right? More information about what kind of work was done here and the directions we followed can be found on Wikipedia.

In addition to the main concrete slab and iron railing, I found another rail in the grass off to the side (shown above) and another concrete slab in the bushes across from the main pad (below):

While the marker and site itself were the main reason for the journey out here, the view of the shoreline turned out to be one of the best in the area. It was very foggy when we were there, which prevented us from confirming that good views of Manitou Island can be had from this site.

This was a great experience, but one I would definitely want to be better prepared for if I ever went back. To get to the rocket range, take US-41 all the way to its end to the east of Fort Wilkins (there’s a pulloff here with a couple historic markers). The road turns to dirt after this, stay straight. It seems like easy going at first, and the road climbs high for some great views – things will get more challenging after this. We made it a little over 4 miles in with a KIA Sorento, but had our share of close calls along the way. THIS IS NOT A GOOD ROAD. There was a clearing on the right that we parked in, got the mountain bikes off, and went 1/4-1/2 mile to the fork with the ATV trail that would get us the rest of the way. It’s pretty obvious which trail is the right one, and once again it seemed like easy going, before things got bad. The trail becomes incredibly rocky in spots (we walked the bikes a lot), and we had to cross a small stream along the way. There are also several intersections and nothing is marked, my best advice is to stay on the “main” trail and if ever given an option stay to the left. The trail splits in an obvious way, with the better looking trail going downhill and to the right – go left here and it’s about 1/4 mile to the shore and the marker. Coordinates for the site are 47 deg., 25’48″N 87 deg., 43′ 1″ W.

As far as wildlife, we saw this snapping turtle about a mile into the drive and little more than birds the rest of the way, even though it seemed like a prime location for a close encounter with some of the area’s larger mammals.