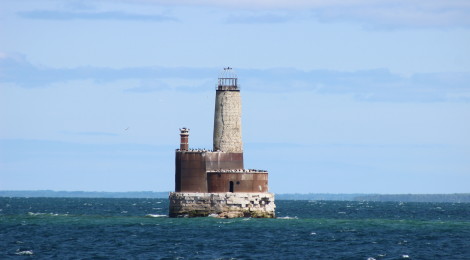 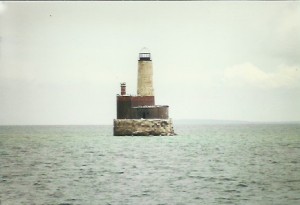 While Michigan is home to more lighthouses than any other state, not all of its surviving lights are easily accessed or still in good shape. The Waugoshance Lighthouse in Lake Michigan is widely considered one of the state’s most endangered beacons, and the toll time has taken is easily visible to those able to make the trip out to visit it. We’ve been fortunate to get to see this lighthouse a few times on Shepler’s Lighthouse Cruises out of Mackinaw City, and were impressed that much of this lighthouse is still standing given its history.

This lighthouse was constructed in 1851, replacing a lightship that had stood on the shoal for two decades. The shoal is located in the area where vessels headed to or from Chicago, Milwaukee and other southern Lake Michigan ports need to make the turn to or from the Straits of Mackinac. It remained an active aid to navigation until 1912, when the White Shoal Light made it obsolete. The tower of the Waugoshance Lighthouse stands 63 feet tall, with a steel cage at its top. 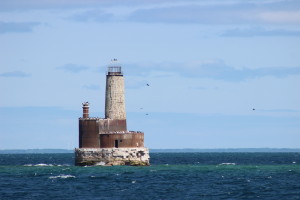 Some interesting facts about the Waugoshance Lighthouse are that it was one of the first Michigan lighthouses completely surrounded by water, as well as that it was one of the earliest uses of a crib structure. The “bird cage” lantern room is one of only three on the Great Lakes, and the lighthouse was once encased with steel plating similar to Big Sable Point Lighthouse. It was also once painted white and red, though today only the Cream City brick remains in a tan/gray color. 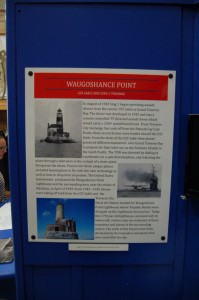 The most interesting facts about this light center around it once being a bombing target for practice runs during the World War II era. The keeper’s house and the steel plating around the tower did not survive the bombing, and it’s easy to see just how much more damage was done to the structure during this time. While visiting the Grand Traverse Lighthouse in Leelanau State Park, we found an informational display that gave some of the history of these exercises: “In August of 1943 Stag 1 began operating assault drones from the carrier USS Sable in Grand Traverse Bay. The drone was developed in 1942 and was a remotely controlled TV directed assault drone which would carry a 2000 pound bomb load. From Traverse City via a barge that took off from the Hannah Lay Coal Docks, these secret drones were loaded aboard the USS Sable. From the decks of the USS Sable these planes practiced different maneuvers over Grand Traverse Bay to prepare for their later use on the Solomon Islands in the South Pacific. The TDN was directed by dialing the coordinates on a spin dial telephone, and watching the plane through a television in the cockpit of a sister plane flying near the drone.Practice for these unique planes included learning how to fly with this new technology as well as how to drop their torpedoes. The United States government purchased the Waugoshance Point Lighthouse and the surrounding area, near the straits of Mackinac, in April of 1943. From 1943 – 1945 drones were taking off from both the USS Sable and the Traverse City Naval Air Station headed for Waugoshance Point Lighthouse where torpedo bombs were dropped on the lighthouse for practice. Today this 170 year old lighthouse, accessed only by watercraft, visitors may see remnants of these torpedoes and planes in the surrounding waters. The walls of this beacon have been decimated by the torpedoes and planes that once controlled the sky.”