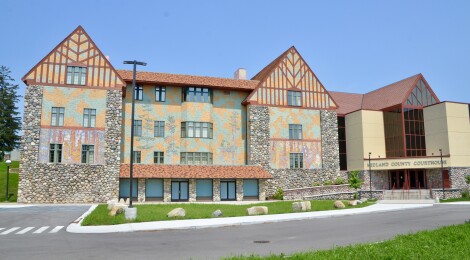 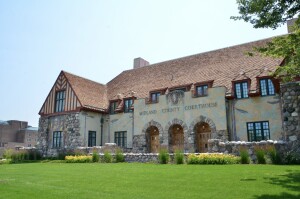 Our Michigan Roadside Attractions series has already covered courthouses in Houghton, Crystal Falls, and Berrien Springs. today we turn our attention to the courthouse in Midland, which is the only Tudor Revival style courthouse in the state. The Midland County Courthouse dates back to the 1920s and it is located on Main Street just a block away from the Tittabawassee River. 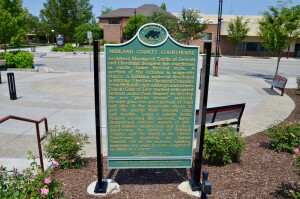 A Michigan historical marker near the building provides quite a bit of background on its history: “In 1831 the first white settlers in the area built a fur trading post near this site, called “Little Forks” by the Indians. When Midland County was organized in 1850, 65 people lived here. In 1856, Henry C. Ashmun, the county’s first prosecuting attorney. was authorized to locate a courthouse, and he chose this site. The original courthouse served until 1926. In 1919, Mayor Joseph A. Cavanagh proposed that a new courthouse be built at this site. Voters approved a $225,000 bond issue in 1920 and in gratitude for the effort of area servicemen, invited the Midland American Legion to make its home here at the courthouse. Herbert H. Dow, founder of The Dow Chemical Company, provided additional funds and materials. Dr. Dow laid the cornerstone on March 25, 1925. This courthouse was occupied on January 1, 1926.” It continues on its second side: “Architect Bloodgood Tuttle of Detroit and Cleveland designed this courthouse in rustic Tudor Revival style. A portion of the exterior is magnesite stucco, a building material developed in 1925 by The Dow Chemical Company from Midland’s vast underground brines. Donald Gibb of Dow worked with noted Detroit artist Paul Honore to develop the new “plastic mosaic” material. Ground glass was used instead of sand and silex in the magnesite stucco to give the murals their unusual color and sparkle. Using a palette knife, Honore created the layered three-dimensional exterior murals of life-sized Indians, lumbermen and traders, illustrating the history of Midland County, and the mural in the Circuit Courtroom depicting an Indian Council. All of the exterior building materials are said to have originated in Midland County.” 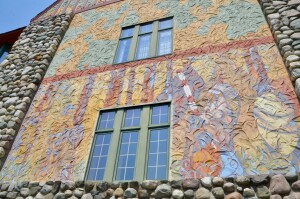 The stucco murals are one of the most interesting features of this building and really cool to see up close. While many modern courthouses have a dull and cold feel architecturally, the Midland County Courthouse seems to have a bright and welcoming feel. From Main St. only two levels above ground are visible, but walking around to the “back” of the building you can see how it was built into the existing slope of the land and that it is much bigger than it looks from the other side. This is definitely one of the most unique Michigan courthouses we have visited! 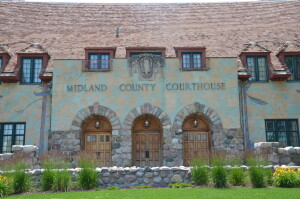 We visited on a weekend so we were not able to get a look at the interior, but there are some pictures online that show the murals well. 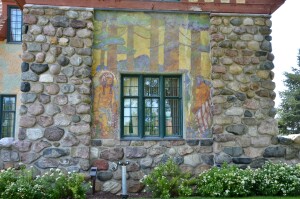 The Midland County Courthouse is located at 301 W. Main St. There is parking on Main Street as well as in a lot off of Gordon St. Next door to the courthouse is the Santa House, a favorite holiday stop. The famous Tridge is just a few blocks away.