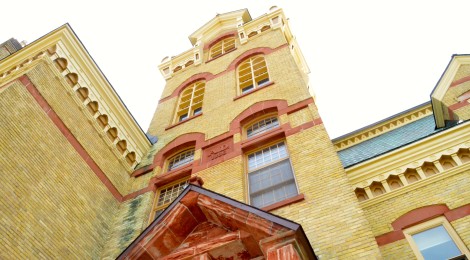 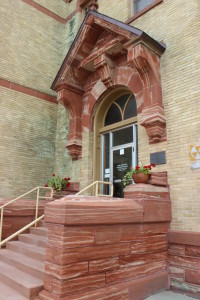 Houghton, Michigan is home to many historic and large buildings that were built during the area’s mining boom. One of the grandest and most easily recognized buildings in town is the Houghton County Courthouse, which sits up on a hill at the intersection of Houghton St. and Dodge St. 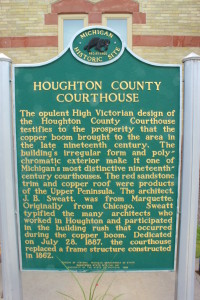 A Michigan historical marker in front of the building provides some history: “The opulent High Victorian design of the Houghton County Courthouse testifies to the prosperity that the copper boom brought to the area in the late nineteenth century. The building’s irregular form and polychromatic exterior make it one of Michigan’s most distinctive nineteenth century courthouses. The red sandstone trim and copper roof were products of the Upper Peninsula. The architect, J. B. Sweatt, was from Marquette. Originally from Chicago, Sweatt typified the many architects who worked in Houghton and participated in the building rush that occurred during the copper boom. Dedicated on July 28, 1887, the courthouse replaced a frame structure constructed in 1862.” 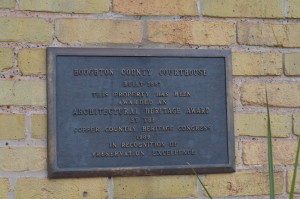 The marker’s other side details the history of the county and its sudden rise in population and industry in the 1840s-1870s: “Organized in 1845, Houghton County once comprised the entire Keweenaw Peninsula. Eagle River was the first county seat. In 1861, after the state legislature split the county into Keweenaw and Houghton, the village of Houghton became the new seat of Houghton County government. Finnish settlers were predominant in the county. There were also Scandinavians, as well as Cornish, Germans and French Canadians. Jobs were plentiful, since Houghton County was the center of the copper boom. In 1874, Michigan produced 88 percent of the nations’ copper, of which Houghton county mines supplied 79 percent. Two years later, Michigan copper production peaked at 90 percent of the nation’s output. The Michigan Mining School opened in Houghton in 1886. In 1964 it was renamed Michigan Technological University.” 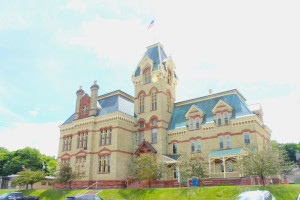 The building is still in use today. It has seen several restorations over the years, and a modern addition and parking structure were added to the back corner of the building without taking away any of the beauty of the original building when viewing it from the street.