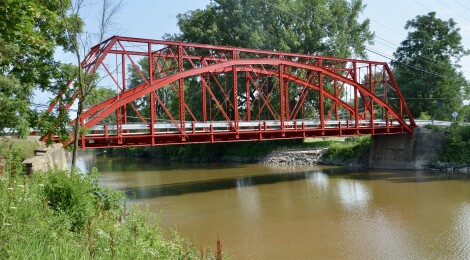 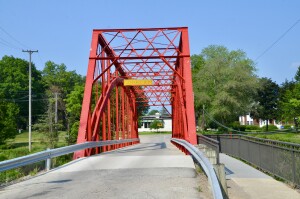 The Currie Parkway Bridge isn’t even the most famous bridge in Midland (that would be the Tridge), but it is definitely worth a visit if you have any interest in bridges, transportation history, or Michigan landmarks. While visiting Midland recently this bright red bridge caught our eye so we had to stop and check it out. If you’ve visited our site before you know we are pretty big fans of Michigan’s historic bridges and visiting as many of them as we can. 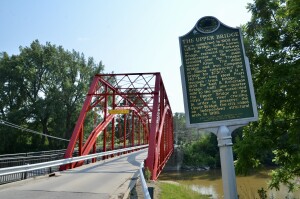 The Michigan historical marker here (titled ‘The Upper Bridge’) reads: “When completed in 1908 the Upper Bridge, today known as the Currie Parkway Bridge, replaced its wooden predecessor as the main crossing over the Tittabawassee River. The Joliet Bridge and Iron Company of Illinois constructed the bridge for $7,500. It is a 140-foot-long steel Pratt through-truss bridge. In 1955 the Karl B. Robertson Bridge, built one-quarter mile to the south, succeeded the Upper Bridge as the city’s main river crossing. In order to preserve the Upper Bridge, the city added an independent structural arch in 1988.” 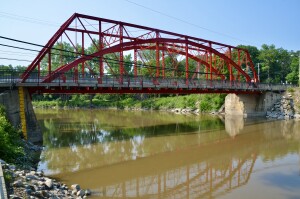 The bridge has a weight limit of five tons, and was painted red in 2014. It was damaged in 2018 by an overweight truck while carrying extra traffic due to construction on the M-20, and the decision was made to re-open it in 2019 as a one-way only bridge. The Midland Historical Society has some interesting photos from floods that brought the river over the bridge in 1976 and 1986. The bridge being one-way limits the amount of traffic over it and should in theory help extend its life span. There is plenty of parking near the bridge in Riverside Park just east of the golf course. 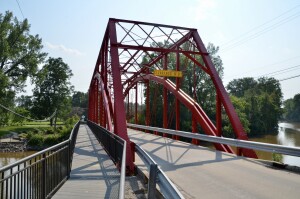