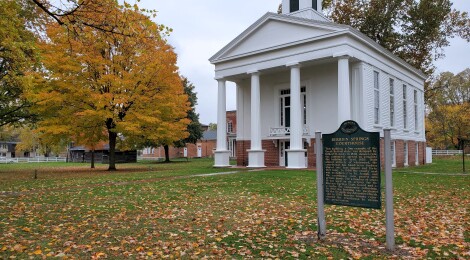 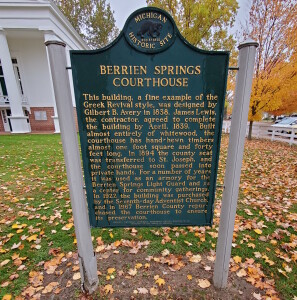 Berrien Springs is a small village in southwest Michigan located on Old U.S. 31 (M-139). It is home to Andrews University and several wineries. Michigan’s Oldest County Courthouse is also located in Berrien Springs, at the corner of N. Cass St. and W. Union St. The Berrien County Courthouse dates back to 1839 and is now part of a museum complex. 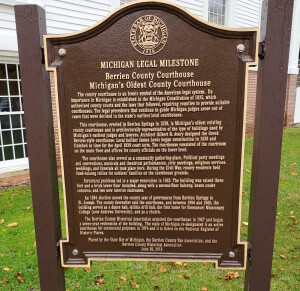 This is one of the 40 sites in Michigan honored by the Michigan Bar Association with a Legal Milestone plaque. The text on that plaque covers all of the history of this building: “The county courthouse is an iconic symbol of the American legal system.  Its importance in Michigan is established in the Michigan Constitution of 1835, which authorized county courts and the laws that followed, requiring counties to provide suitable courthouses. The legal precedents that continue to guide Michigan judges arose out of cases that were decided in the state’s earliest local courthouses. This courthouse, erected in Berrien Springs in 1839, is Michigan’s oldest existing county courthouse and is architecturally representative of the type of buildings used by Michigan’s earliest judges and lawyers. Architect Gilbert B. Avery designed the Greek Revival-style courthouse. Local builder James Lewis began construction in 1838 and finished in time for the April 1839 court term. The courthouse consisted of the courtroom on the main floor and offices for county officials on the lower level.”

“The courthouse also served as a community gathering-place. Political party meetings and conventions, musicals and theatrical performances, civic meetings, religious services, weddings, and funerals all took place here. During the Civil War, county residents held fund-raising rallies for soldiers’ families on the courthouse grounds. Structural problems led to a major renovation in 1863.The building was raised three feet and a brick lower floor installed, along with a second-floor balcony, boxes under columns, and two new interior staircases. An 1894 election moved the county seat of government from Berrien Springs to St. Joseph. The county thereafter sold the courthouse, and between 1894 and 1966, the building served as a dance hall, militia drill hall, the first home for Emmanuel Missionary College (now Andrews University), and as a church. The Berrien County Historical Association acquired the courthouse in 1967 and began a seven-year restoration of the building. The state of Michigan re-designated it an active courthouse for ceremonial purposes in 1974 and it is listed on the National Register of Historic Places.” 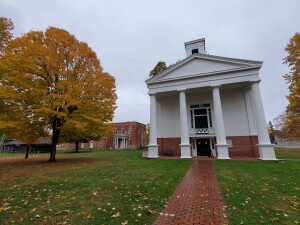 The Berrien County Courthouse is now part of a complex called the History Center at Courthouse Square that includes five buildings. The other four buildings are Bennett’s Forge, the Murdock Log Cabin, the Records Building, and the Sheriff’s Residence & Jail Plaza. Find out more at http://berrienhistory.org/plan-your-visit/.