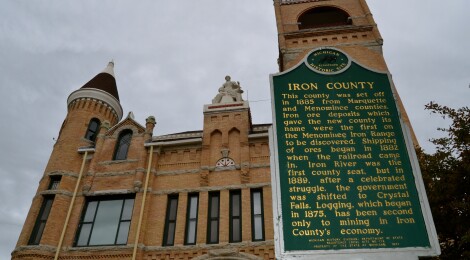 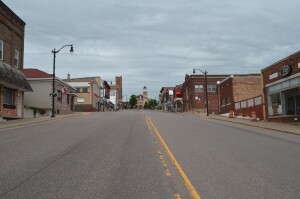 Iron County was established in 1885, and Crystal Falls was selected as the county seat four years later. Construction on the Iron County Courthouse began in 1890. The courthouse is “constructed of regional materials, including reddish stone columns quarried from the nearby Paint River and yellow clay bricks.” Now, 130 years later, it still stands proudly at the top of the hill overlooking downtown Crystal Falls. This excellent example of Richardsonian Romanesque architecture is a Michigan Historic Site and is also listed on the National Register of Historic Places. 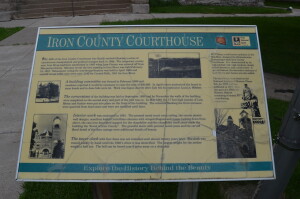 The Iron County Heritage Trail plaque on the courthouse lawn gives more background of this stunning structure: “The cornerstone of the building was laid in September 1890 and by November the walls of the building were completed the second story and part of the roof was on. In May 1891 the 17 foot high statues of Law, Mercy and Justice were put into place on the front of the building. The columns flanking the front entrance were quarried from local stone and were not installed until later. 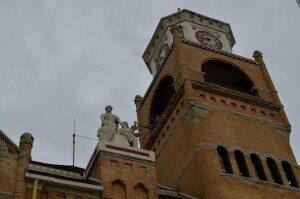 Interior work continued in 1891. The pressed metal court room ceiling, the ornate plaster above, the cast iron decorated support for the chandelier and the chandelier itself alone made the building the “Jewel of Iron County.” The graceful stairs with pointed newel posts and the carved floral detail of the door casings were additional details of beauty.” 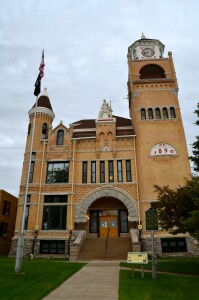 “The tower clock with four faces was not installed until almost twenty years later. The clock was wound weekly by hand until the 1940s when it was electrified. The largest weight for the striker weighs a half ton. The bell can be heard over 4 miles away on a clear day.”