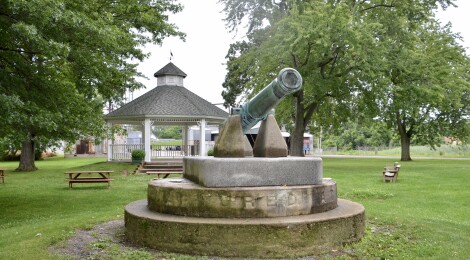 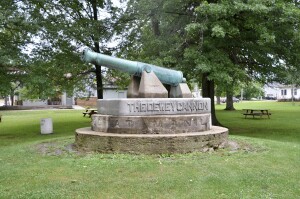 The small village of Three Oaks in Berrien County is home to Journeyman Distillery and a charming downtown with shops and restaurants. The most famous landmark in the village is the Dewey Cannon, a Spanish-American war relic that is the centerpiece of a park on Central Street. Each Saturday in the summer the park hosts a free concert series (find out more at https://www.harborarts.com/music-in-the-park). On a recent visit to the area we had a chance to stop by the park and learn about how this piece of American history ended up in Three Oaks. 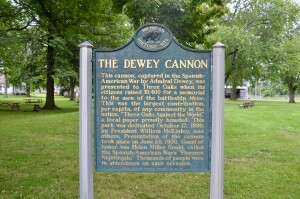 The Michigan historical marker in the park reads: “This cannon, captured in the Spanish-American War by Admiral Dewey, was presented to Three Oaks when its citizens raised $1,400 for a memorial to the men of the battleship Maine. This was the largest contribution, per capita, of any community in the nation. “Three Oaks Against the World,” a local paper proudly boasted. This park was dedicated October 17, 1899, by President William McKinley, and others. Presentation of the cannon took place on June 28, 1900. Guest of honor was Helen Miller Gould, called the Spanish-American War’s “Florence Nightingale.” Thousands of people were in attendance on each occasion.”

This is one of a handful of memorials to the U.S.S. Maine that can be found in Michigan. In a previous post we profiled the Alpena City Hall and its memorial featuring an actual cannon from the Maine. Other memorials we know of can be found in Hopkins, Niles, and Galesburg. 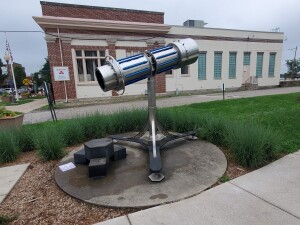 A few blocks away on Elm St. there is a large working kaleidoscope and a few other art pieces on the Chamberlain Path.