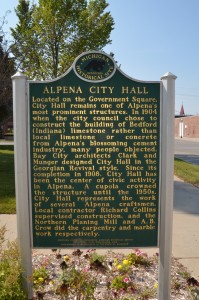 Alpena is one of the largest cities in Northern Michigan (population of 10,000+) and its downtown area is home to many historic buildings from the early 1900s. One of the more prominent buildings is Alpena City Hall, found on 1st Ave. between Park Place and Water St. The Michigan historical marker on site details its construction: “Located on Government Square, City Hall remains one of Alpena’s most prominent structures. In 1904 when the city council chose to construct the building of Bedford (Indiana) limestone rather than local limestone or concrete from Alpena’s blossoming cement industry, many people objected. Bay City architects Clark and Munger designed City Hall in the Georgian Revival style. Since its completion in 1908, City Hall has been the center of civic activity in Alpena. A cupola crowned the structure until the 1950s. City Hall represents the work of several Alpena craftsmen. Local contractor Richard Collins supervised construction and the Northern Planing Mill and A.B. Crow did the carpentry and marble work respectively.” 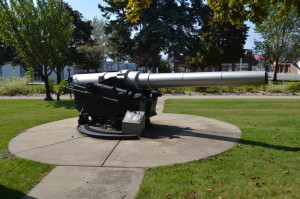 In addition to the building itself, there is a military artifact on the lawn in front of Alpena City Hall that draws plenty of attention as well. A cannon from the ill-fated USS Maine rests on the city hall lawn, and a large plaque nearby gives a few of the details of how it made its way to Alpena. “The battleship MAINE became famous when an explosion destroyed her in the harbor at Havana, Cuba, on February 15, 1898. The tragedy that killed 266 U.S. officers and sailors led to the U.S. declaration of war against Spain. On July 4, 1912 much of Alpena turned out for the dedication of the MAINE cannon. The day’s activities included a parade, music and lots of speeches.” An article highlighting stops along the U.S. 23 Heritage Route notes that “the ship’s remains were eventually raised in 1912 and at that time Republican George A. Loud of Michigan forwarded to the Navy Department a series of resolutions sent to him by the chamber of commerce and the common council of the city of Alpena requesting the loan” of a piece of naval ordinance of historical interest. In March of 1912 the Naval Department decided to loan Alpena a six-inch gun taken off of the Maine.” This is the only city in the country that has a cannon from the MAINE on display. 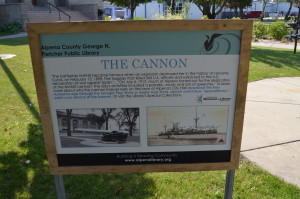 Be sure to check out our other favorite nearby Alpena attractions: the Alpena Light (only a few blocks away), the stainless steel eagle sculpture in front of the Besser Museum, a Paul Bunyan statue made of car parts, and the NOAA Great Lakes Maritime Heritage Center. We also have a post that highlights 10 Things to See and Do in Alpena.