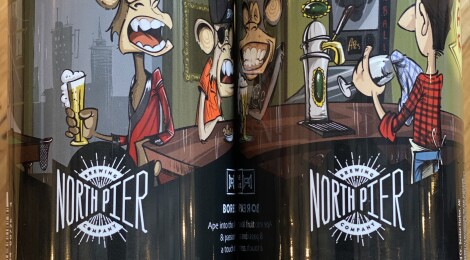 You wouldn’t expect NFTs (non-fungible tokens) to be a hot theme at Michigan breweries, but one MI brewer could see strong demand for their latest IPA from NFT fans and owners of one of the most valuable NFT series.

North Pier Brewing in Benton Harbor launched Bored Ape IPA, an IPA featuring “tropical fruit and passionfruit aromas and a touch of hop bitterness.” The IPA has an ABV of 6.0% and is a tribute to Bored Ape Yacht Club.

“Stay bored, my friends. #BAYC” reads the description of the beer on North Pier’s website. 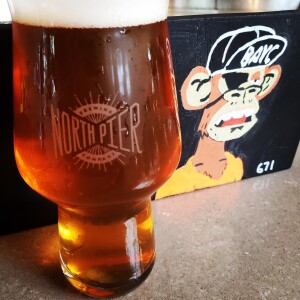 North Pier Brewing was opened in May 2016 and is less than two miles from Lake Michigan. The brewery features a rotating list of beers including hoppy IPAs, Belgian style ales and craft cocktails.

Travel the Mitten interviewed North Pier owner Jay Fettig recently to hear how the pandemic impacted business and the history behind the Bored Ape IPA launch.

“Unfortunately, we were required to be closed or at 50% capacity in 2020. It wasn’t ideal but we were able to make it through and retain all our employees that wanted to stay,” Fettig said.

The owner told me that business in 2021 has been great for the brewery and restaurant portion of the business.

“I got my first Bored Ape after the mint but prior to them exploding. The community was very active and there were lots of people talking about ideas centered around the community.”

Someone on Twitter suggested a Bored Ape Brewing Company. Fettig responded that he owns a brewery in Michigan and was happy to help. 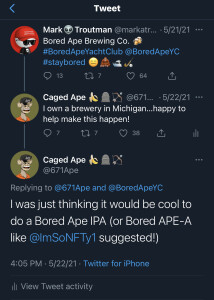 Fettig launched Bored Ape IPA in honor of the NFT. The brewery owner reached out to the Bored Ape Yacht Club creators to use the imagery of the Apes on the beer labels. North Pier was unable to secure the images.

Fettig said he teamed up with Rui Duarte on label design. Duarte is known as the artist for the Bulls on the Block NFTs. 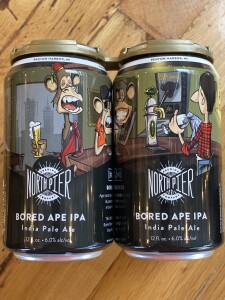 Fettig said the brewery is working on figuring out additional NFT-inspired beers in the future.

“There’s a lot of focus on rarity and scarcity in NFTs which leads to collectability and so we might use those mechanics with some of our drops.”

The beer is only available at the North Pier taproom currently. The brewery will launch 4-packs of 12oz cans in the taproom and through online ordering (where applicable) in the coming weeks.

Bored Ape Yacht Club’s passionate fan base has launched several meet-ups in the past months including a recent get together in California. Fettig tells us he would be open to North Pier being the home of a Michigan Bored Ape Yacht Club owner meet-up.