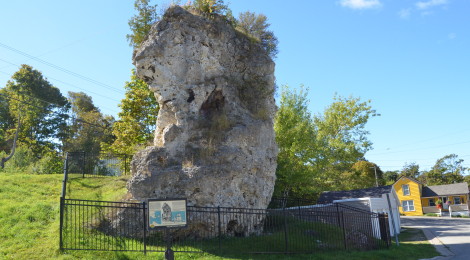 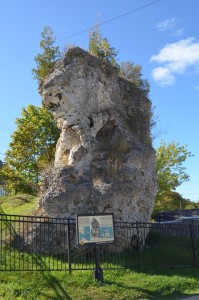 Every once in awhile we come across a Michigan roadside attraction that we’ve driven by many times over the years, often without realizing its significance. This was the case with St. Anthony’s Rock in downtown St. Ignace, one of a handful of limestone breccia sea stack formations in the area. By far the best known of these formations is Castle Rock, which is now a tourist attraction next to I-75. Other popular formations include Skull Cave, Arch Rock, Sugar Loaf, Devil’s Kitchen, and Robinson’s Folly on Mackinac Island. St. Anthony’s Rock once featured a concert performance area and is believed to have been a historic Native American lookout, but now it sits quietly a block from the shops on State St. 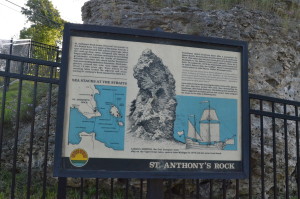 There is an informational plaque in front of the rock that gives details on its history and possible name origin: “St. Anthony’s Rock is one of several ‘sea stacks’ in the Straits Area. It is made of Mackinac breccia, a type of stone formed 350 million years ago, when the roofs of deep caves collapsed into stacks of fragmented rock. Calcium carbonate in circulating groundwater cemented the stacks of limestone, dolomite and chert into much harder formations than surrounding unbroken limestone. Much later, glaciers covered this area, then began melting about 12,000 years ago. Wave action in the resulting lakes eroded the adjacent soft stone, leaving St. Anthony’s Rock exposed by 2000 B.C.” 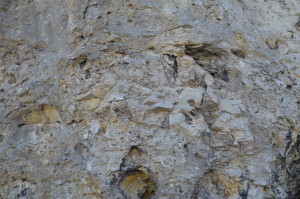 “Sometimes called Goudreau Rock after a prominent St. Ignace family, the formation is better known as St. Anthony’s Rock. This named may well have been given to it by Father Louis Hennepin or the famous Great Lakes explorer Sieur de la Salle. On August 26, 1679 the Franciscan priest was aboard La Salle’s famous ship, the Griffon, when it encountered a violent storm in Lake Huron.  Father Hennepin wrote: ‘At this time the Sieur de la Salle adopted in union with us Saint Anthony of Padua as the protector of our enterprises and he promised God if he did us the grace to deliver us from the tempest, that the first chapel he should erect…should be dedicated to that great Saint.’Upon safe arrival at the thriving fur trade center of St. Ignace, the men may have named this rock, then dominating the landscape,m after St. Anthony. The Italian priest would have likely suggested an Italian patron, in fact, later assigned the name to the falls at Minneapolis.” 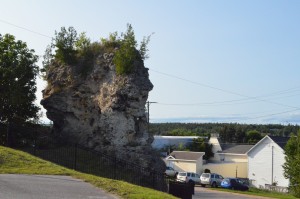 The city of St. Ignace has plans in the works to construct a pocket park around St. Anthony’s Rock after an online fundraising campaign in 2016 successfully raised more than $25,000.