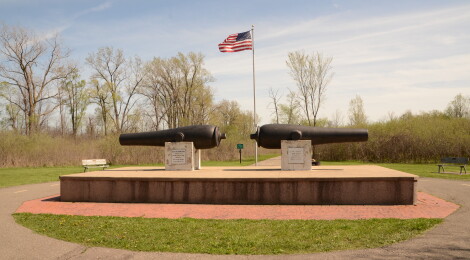 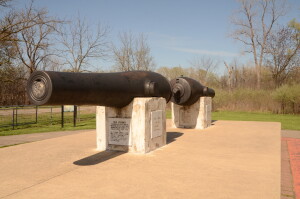 Michigan was heavily involved in the early parts of the War of 1812, and many monuments, memorials, and historic sites can be found today that tell of battles fought within our current state boundaries. The British sieged Fort Mackinac on Mackinac Island in July of 1812, and less than a month later the Battle of Brownstown took place south of Detroit. This summer we had a chance to stop by the small pocket park that serves as a memorial to the Battle of Brownstown and those who lost their lives there. 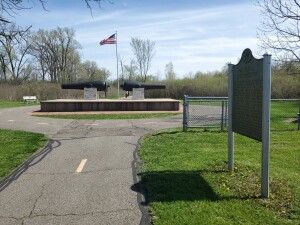 The Michigan historical marker next to the park reads: “In this vicinity on Aug. 5, 1812, six weeks after the outbreak of war, an Indian force, led by the famous Shawnee chief, Tecumseh, ambushed about 200 Americans under Major Thomas Van Horne who were on the way south to the River Raisin. There, supplies vitally needed by Hull’s army in Detroit, were awaiting an escort through the Indian blockade of the River Road. Tecumseh opened fire as the Americans forded Brownstown Creek. Van Horne, overestimating the Indians’ numbers, ordered his men to fall back. The retreat soon became a panic-stricken flight back to Fort Lernoult. Seventeen Americans were killed, 12 wounded, and two captured and murdered. One Indian was killed.” 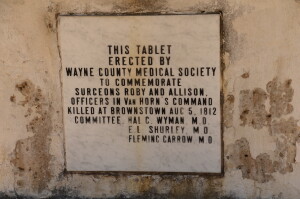 The two black cannons here are the centerpiece of a small park. An American flag flies above this memorial, which several engraved tablets honoring those who fought and/or died here. From one of these tablets we learned that the original memorial was put up in 1908 at W. Jefferson Ave. near Gibraltar Rd., was moved to Parson School in 1958, and was moved and restored at this site in 2005-06. 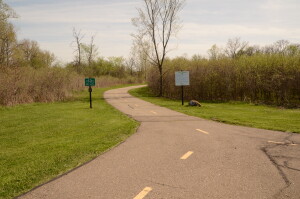 This park is an access point to the Downriver Linked Greenways multi-use trails that eventually lead to Lake Erie Metropark. This memorial can be found on South Gibraltar Rd. near its intersection with W. Jefferson Ave. Although labeled on Google Maps as the Battle of Monguagon Monument, all evidence from our research has that battle taking place north of this site near Trenton.