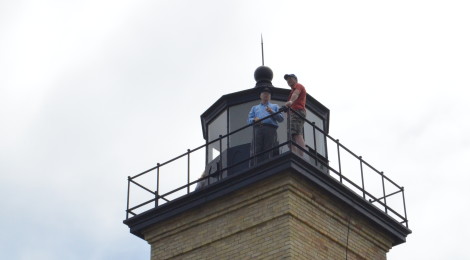 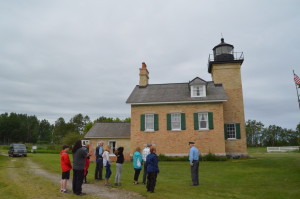 The Ontonagon Lighthouse was built in the 1860s to replace an earlier structure that had deteriorated after a decade of service. The harbor here became incredibly important as the copper rush was in full swing, and a beacon was needed to guide ships in from Lake Superior to port. The light is no longer an active aid to navigation, and it is now open to the public for tours through the Ontonagon County Historical Society Museum. From May to October, guided and narrated tours take place three times a day – find out more at https://ontonagonmuseum.org/. 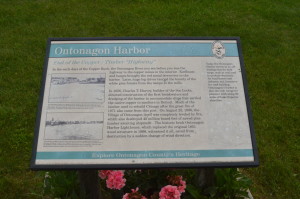 The “Michigan’s Upper Peninsula Heritage Trail” sign on the lighthouse grounds tells more about the history of the area and why the lighthouse was needed: “In the early days of the Copper Rush, the Ontonagon River you see before you was the highway to the copper mines in the interior. Keelboats and barges brought the red metal downriver to the harbor. Later, huge log drives carried the bounty of the white pine forests from the camps to the mills. In 1856, Charles T. Harvey, builder of the Soo Locks, directed construction of the first breakwaters and dredging of the harbor to accommodate ships that carried the native copper to smelters in Detroit. Much of the lumber used to rebuild Chicago after the great fire of 1871 also came from this port. On August 25, 1896, the Village of Ontonagon itself was completely leveled by fire, which also destroyed 40 million board feet of sawed pine lumber awaiting shipment. The historic brick Ontonagon Harbor Lighthouse, which replaced the original 1851 wood structure in 1866, witnessed it all, saved from destruction by a sudden change of wind direction.”

The lighthouse interior has been restored and is decorated with artifacts that represent what life was like during its peak operational years. One of the highlights of visiting is climbing the 34 foot tall tower. From the top you’ll see the Lake Superior shoreline, downtown Ontonagon and the Ontonagon River, and the Ontonagon West Pierhead Lighthouse. The lighthouse tower is attached to a brick, 1 1/2 story keeper’s dwelling and has design similarities with other Michigan lighthouses in Copper Harbor, Escanaba (Sand Point), Gull Rock, Bois Blanc Island, and Marquette.