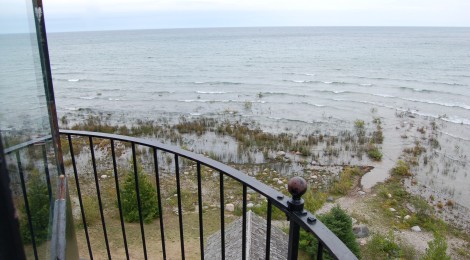 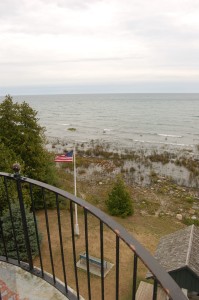 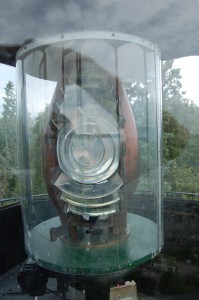 The Old Presque Isle Lighthouse is located at 5295 E. Grand Lake Rd., and the historical marker near the driveway tells of its history: “Presque Isle Harbor is one of Lake Huron’s safest harbors of refuge. Its name comes from the peninsula which, translating from the French, is “almost an Island.” Indians and Frenchmen portaged across the peninsula to avoid several miles of open lake. When vessels came to the harbor in increasing numbers, Congress in 1838 appropriated $5,000 for a lighthouse. Jeremiah Moors of Detroit in 1840 completed this lighthouse, which today is one of the oldest surviving lighthouses on the Great Lakes. Pat Garrity, the last keeper of this lighthouse, was appointed by President Lincoln. Four of Garrity’s children, raised in the keeper’s house, became lighthouse keepers. In 1870, a new lighthouse to the north was completed along with two range lights for the entrance to the harbor.” This lighthouse has been rumored to be haunted for many years. 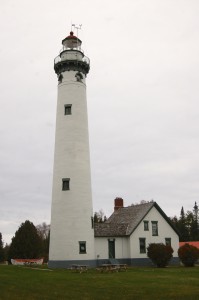 The New Presque Isle Lighthouse is located at 4500 E. Grand Lake Rd. It’s historical marker (“Presque Isle Light Station”) tells how its history begins after the old lighthouse was put out of service: “This lighthouse, built in 1870 by Orlando M. Poe, is one of three Great Lakes towers built from the same plans. It replaced the smaller 1840 harbor light. The conical brick tower rises 113 feet from a limestone foundation. The Third Order Fresnel lens was made by Henri LePaute of Paris. Patrick Garrity, the keeper of the harbor light, lit the lamp for the first time for the opening of the 1871 navigation season. Garrity served here until 1885 when he became keeper of the Harbor Range Lights. His wife, Mary, sons Thomas, Patrick and John, and daughter Anna all served as light keepers in this area. In 1890 a steam operated fog signal manufactured by Variety Iron Works of Cleveland, Ohio, was installed. The light was automated in 1970 by the U.S. Coast Guard.” This is one of the tallest lighthouse towers on the Great Lakes.