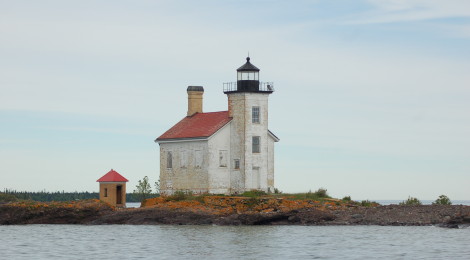 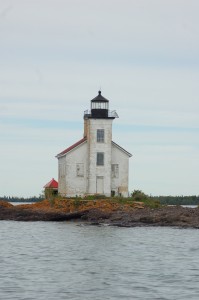 We’ve been fortunate to have the opportunity to visit many of Michigan’s lighthouses, and one of our favorite new additions this year was the Gull Rock Lighthouse near Manitou Island in Lake Superior. Thanks to a sightseeing and fishing cruise with Sand Point Charters in Lac LaBelle, we were able to visit this lighthouse as well as the Manitou Island Lighthouse and Mendota (Bete Grise) Lighthouse in June. Gull Rock is a dangerous, small island in Lake Superior a half-mile west of Manitou Island near the tip of the Keweenaw Peninsula. The lighthouse was constructed in the late 1860s when shipping traffic was at a peak due to the copper mining boom in the Keweenaw. 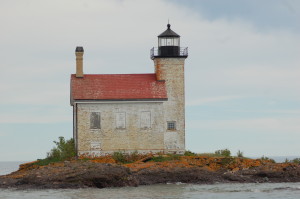 The Gull Rock Lighthouse features a 46 foot tall tower attached to a two-story keeper’s dwelling. It is painted white, with a black lantern room and  a red roof. While the years had taken a toll on the building, restoration efforts since 2012 have it looking much better. As we approached, a bald eagle was resting on the roof of the house. Despite the lighthouse being here, at least six crashes happened in the Gull Rock area in the early 1900s. You can read more about that and find out more about the Gull Rock Lighthouse’s history on Terry Pepper’s Seeing the Light page. 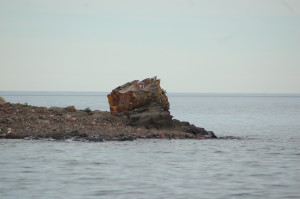 The lighthouse was automated in 1913, and after decades of neglect control was transferred to the Gull Rock Lightkeepers in 2005 – they are a non-profit group looking to restore the light and possibly open it to the public in the future. Find out more about that organization at http://www.gullrocklightkeepers.com/aboutus.htm. 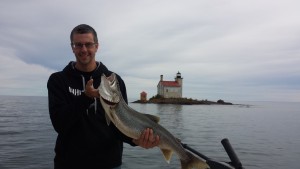 Sand Point Charters offers a variety of cruise options departing from Lac LaBelle. Check out their website at http://sandpointcharters.com/, as well as Captain Brian’s Facebook page for more info and pictures from past trips. You can also view our photos in our Photo Gallery Friday: A Lake Superior Trip With Sand Point Charters post.

Keweenaw Brewing Company (Houghton) features the Gull Rock Lighthouse on their November Gale Pale Ale cans. That beer is a 5% ABV American pale ale available across most of the state in six-packs of 12 oz. cans. 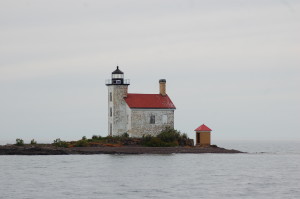