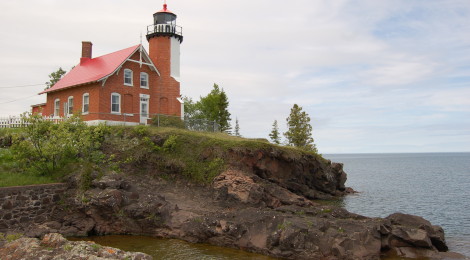 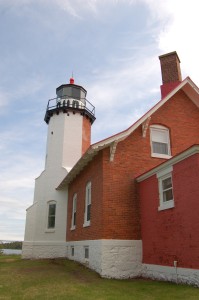 The Eagle Harbor Lighthouse is one of the most picturesque beacons located on Michigan’s Keweenaw Peninsula. Guarding a rocky shoreline near what was once a busy harbor during the copper rush, this red and white brick structure not only still stands but is open for tours as part of a museum complex. The Keweenaw County Historical Society maintains the lighthouse, and also operates the Maritime Museum, Keweenaw History Museum and Commercial Fishing Museum, all located on the lighthouse grounds. This is a cooperating site of the Keweenaw National Historic Park, and was recently featured on our list of 26 Things To See and Do at KNHP. 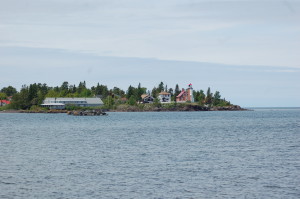 The Eagle Harbor Lighthouse was constructed in 1871, replace a lighthouse from the 1850s that had deteriorated. Its tower stands 44 feet tall, with a focal height of 60 feet and alternating red and white lights. This is still an active aid to navigation, so while you are able to climb the tower part way you can not enter the lantern room. The interior of the keeper’s quarters has been restored to look as it would have when the station was still manned, and a fourth order Fresnel lens is on display. The lighthouse and all other museums are open from mid-June to October, and admission is $5. The Eagle Harbor Lighthouse can be found on Lighthouse Dr., just off of M-26 where the road curves around the harbor at a popular swimming beach (several signs will point you in the right direction). 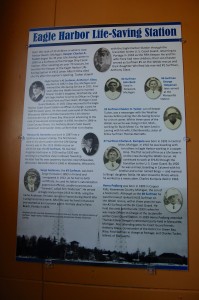 The Eagle Harbor Life-Saving Station is located on the opposite side of the harbor, and is also currently open to the public as a museum. Here you can view boats that were used in rescues on the dangerous waters of Lake Superior, and learn about shipwrecks in the area. It is located at the end of Marina Rd., about a mile off of M-26. Hours of operation are mid-June to October, 9 a.m. to 6 p.m. Find out more at http://www.keweenawhistory.org/sites/lifesaving.html.