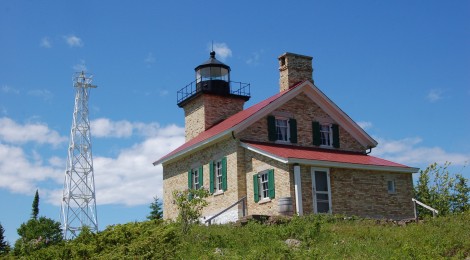 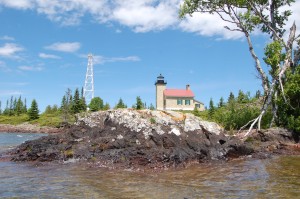 The Copper Harbor Lighthouse is one of the oldest lighthouses on Lake Superior, and it can be found near the tip of the Keweenaw Peninsula in Michigan. The lighthouse is managed by the Fort Wilkins Historic State Park (Michigan DNR). While tours used to be offered through a boat cruise that left the local marina, the state is currently looking for a new vendor to run this operation. While decent views can be found at Astor Shipwreck Park off of US-41, when we visited the area in June 2017 we decided to take our kayaks out and get a closer look. 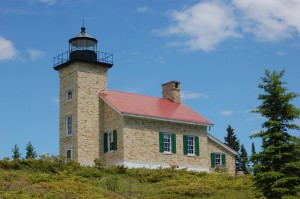 The trip out to the lighthouse was fairly calm and smooth, and took us around 20-30 minutes (though it is definitely a trip for only good weather days). The lighthouse was built in 1866, replacing an 1848 tower.It is constructed of yellow brick and s a great example of the “schoolhouse style” popular in the 1860s. Its tower is over 40 feet tall, though the white skeletal tower next to it (62 feet tall) has provided the light out here since 1933. We had the whole lighthouse area to ourselves and were able to explore a bit and take the time to read the many informative signs. 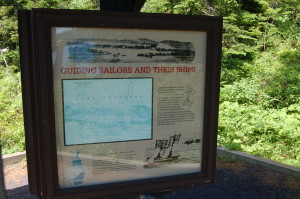 The “Guiding Sailors and Their Ships” sign explains why this lighthouse was necessary: “for centuries, Native Americans, voyageurs, missionaries and explorers coasted the Lake Superior shoreline in open boats and canoes. Their only guide was the natural landscape. Then, in the mid-1840s, commercial mining of Michigan’s copper and iron opened the Upper Peninsula to industrial development. Shipping on Lake Superior expanded rapidly. From across the region came calls for harbor improvements, lighthouses and buoys. Copper Harbor was at the center of the early copper boom. The harbor itself offered mariners a safe haven from Lake Superior’s dangerous storms. Its entry was first marked at private expense, by shoreline fires or small lamps. In 1847, responding to public pressure for navigational aids on the upper Great Lakes, Congress approved construction of the first two lighthouses on Lake Superior – at Copper Harbor and Whitefish Point.” 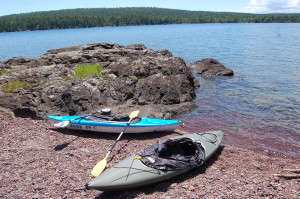 Enjoy this look at our visit to this historic lighthouse. We can only hope that soon there are tours running out to the Copper Harbor Lighthouse again!