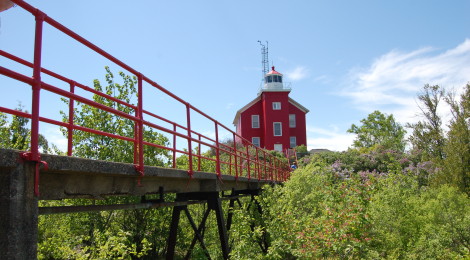 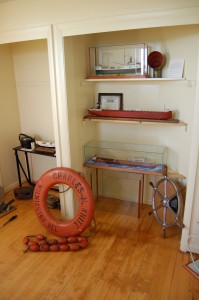 The Marquette Maritime Museum hosts thousands of visitors each year, showcasing their collection of artifacts and exhibits focusing on Lake Superior and the Marquette area. The museum operates in the old city waterworks building on Lake Shore Blvd., and tours of the historic Marquette Harbor Lighthouse are offered through the museum thanks to volunteer guides.

an impressive collection of Fresnel lenses from area lighthouses

wreck of the Edmund Fitzgerald

wreck of the Henry B. Smith

There is also a small gift shop. It is $6 admission for the museum, or $10 for the museum and the lighthouse tour – quite a bargain. While we enjoyed the museum’s exhibits, the highlight for us was finally getting an up-close view of the lighthouse. We’d viewed it from the harbor and from the beach at McCarty’s Cove for many years, but getting to walk around the grounds and go inside this historic structure was one of the highlights of our trip. 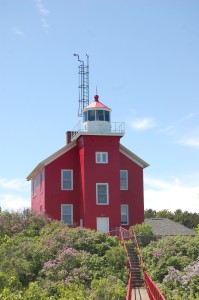 The Marquette Harbor Lighthouse was built in 1866, replacing an earlier structure that did not stand the test of time. It has a brick tower that is 40 feet tall and attached to a two-story dwelling. The lighthouse’s red paint helps it stand out on the rock point on which it sits. The tower has a white lantern room capped with a red roof. This Lake Superior beacon was helpful in guiding ships to the ore dock that used to operate in the lower harbor, and it still guides vessels on their way there and to the upper harbor and its still-operating ore dock.

The museum is located at 300 Lake Shore Blvd. and you can find out more about its hours of operation and schedule of lighthouse tours at http://mqtmaritimemuseum.com/.