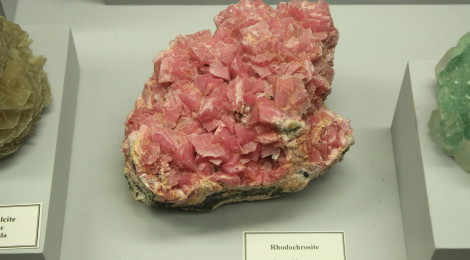 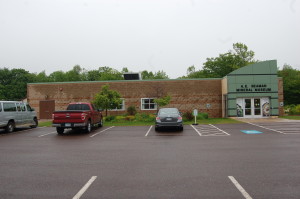 The A.E. Seaman Mineral Museum in Houghton, Michigan is the state’s official mineral museum, a cooperating site of the Keweenaw National Historic Park, home to a Guinness World Record piece of copper, and home to one of the best collections of Great Lakes minerals. Its small admission fee ($6 adults/$5 senior/$3 student/$1 junior) that is good for two full days also makes it one of the best values in the Upper Peninsula. The museum is located on the campus of Michigan Technological University, and you can find out more about hours of operation and see galleries of the collection at http://www.museum.mtu.edu/.

Before even entering the museum you will see a pavilion near the parking lot’s west end. This pavilion is home to the world’s largest native copper slab, weighing in at 17 tons. The informational sign in front of this exhibits notes that it “was discovered in July of 1991 by local divers Bob Barron and Don Kauppi on the bottomlands of Lake Superior in about 30 feet of water due north of Jacob’s Creek, between Eagle River and Eagle Harbor here in the Keweenaw Peninsula. The native copper slab was formed about 1 billion years ago when hot waters precipitated native copper and other associated minerals in a tabular vein. The vein was exposed by the action of glaciers and from its near vertical position the slab fell over onto what would become the bottomland of Lake Superior.” 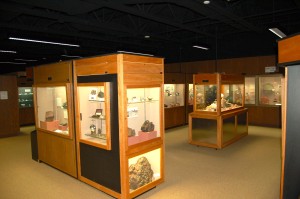 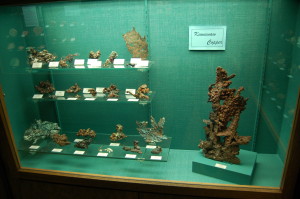 Inside the museum, exhibits showcase minerals from all over the world. Given the museum’s location and the enormous influence copper mining had on the surrounding area, it is not surprising to see many cases dedicated to Keweenaw copper and other local specimens. Among the highlights are an exhibit of fluorescent minerals, displays of crystals, Great Lakes mineral displays (including Petoskey stones), a Lake Superior Iron District display, and specimens from all over the world and all over the United States. 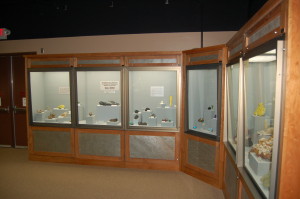 In addition to the museum’s collection, this is also home to the University of Michigan’s mineral collection. That collection includes pieces from Douglass Houghton’s personal collection. Houghton was the first state geologist and one of the earliest professors at the University of Michigan. You’ll find tributes to Houghton in the names of the city and county the museum is located in as well as a nearby waterfall and a lake in the Lower Peninsula. Houghton died in 1845 when the boat he was in while working on a geological survey of Lake Superior capsized; a monument to him can be found in Eagle River. 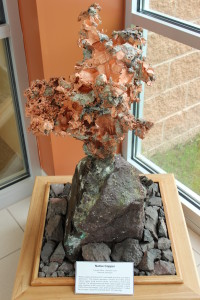 The Seaman Mineral Museum is named for a professor at Michigan Tech who “was instrumental in building the collection beginning in the late 1880s and continued as the first curator of the museum until his death in 1937. The museum was named after him in 1932.” Be sure to check out the gift shop to take home a piece of Michigan mineral history! Just west of the museum you will find the Phyllis and John Seaman Garden, which “exhibits rocks from the Great Lakes region as well as a diversity of plants not geographically restricted.” 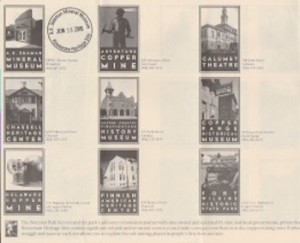 Check out our full list of 26 sites worth visiting at the Keweenaw National Historic Park for more ideas in the area as well as details on filling up your Stamp Album. The museum is located at 1404 E. Sharon Ave. (see map below)