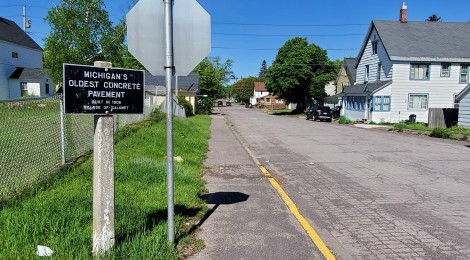 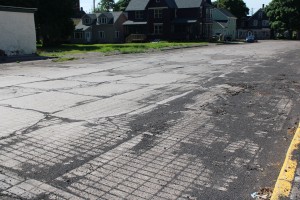 Calumet is the home of many impressive buildings and historic sites from a time when it was the center of Michigan’s copper mining industry. We love stopping in Calumet any time we visit the Keweenaw Peninsula and we always seem to find something new that we haven’t seen before. A few years ago while visiting we stumbled across a small plaque denoting the road at the intersection of Portland St. and Seventh St. as “Michigan’s Oldest Concrete Pavement.” Today we will share some views of this still-surviving historic street as well as some of the information we were able to track down about it. 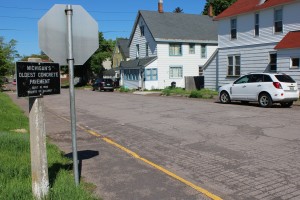 The copper mining boom provided the finances for Calumet to build many structures that were state of the art at the time. We were able to learn a bit more about what led to roads being included in that mix on the International Society for Concrete Pavements website: “While Red Jacket’s main commercial district – 5th Street – had already been paved with brick pavers, most of the rest of the village’s remaining streets were still only dirt pathways. The main methods of paving were brick, wood block, or macadam (a type of bonded gravel). But there was also a brand new type of paving agent used only sparingly (and selectively in larger cities such as Chicago) known at the time as “granitoid”—the precursor to today’s modern concrete pavement. Highly durable and thought to have a much longer lifespan than even paving bricks, granitoid had the distinction considerably cheaper price and installation costs. The village was sold, and that Spring, Red Jacket’s streets began to receive their brand new concrete surfaces.” 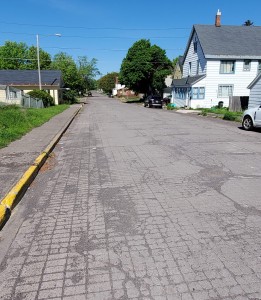 Considering how harsh the Keweenaw winters can be, it is amazing that this concrete pavement has survived for almost 120 years! These streets may not see as much traffic as they did when first constructed, but that takes nothing away from their longevity. The historical marker plaque was added to this site in 1956 and is easy to miss if you aren’t looking for it. If you’re in Calumet to check out Michigan’s mining history, consider visiting this historic street site as well! 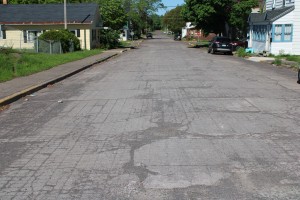 Nearby historical attractions include the Italian Hall Memorial, the Russell Snowplow, the large piece of Float Copper and Andrew Agassiz statue near the KNHP headquarters, the Calumet Colosseum, and the Calumet Theatre.