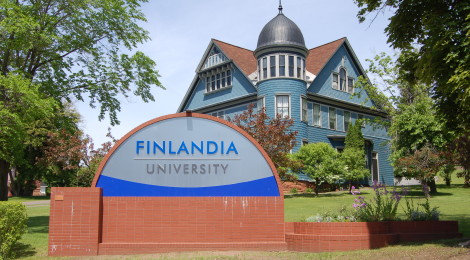 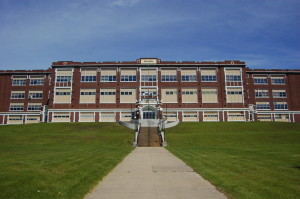 On the north side of the Portage Lake Lift Bridge is Hancock, home to a the Upper Peninsula’s only private university and the only remaining North American institution of higher learning founded by Finnish Americans: Finlandia University. Today we will show you three noteworthy things to check out as you drive through Hancock. This was originally called Suomi College, and we learn more about its history from the Michigan historical marker at 601 Quincy St.

“In the 1880s large numbers of Finns immigrated to Hancock to labor in the copper and lumber industries. One immigrant, mission pastor, J. K. Nikander of the Finnish Evangelical Lutheran Church of America, headquartered in Hancock, wanted to ensure seminary training in America. He observed that Swedish and Finnish along the Delaware River did not train new ministers and he feared a loss of Finnish identity. In 1896, Nikander founded Suomi College. The college’s role was to preserve Finnish culture, train Lutheran ministers and teach English. During the 1920s Suomi became a liberal arts college. In 1958 the seminary separated from the college. Four years later the Finnish Evangelical Lutheran Church of America merged with other mainstream Lutheran churches.”

The first building at the college still stands today and is one of many buildings in the downtown area to feature Jacobsville sandstone. The back side of the Michigan historical marker here gives more details: “Suomi College was founded in 1896 by the Finnish Evangelical Church of America. The cornerstone of Old Main, the first building erected at Suomi College, was laid on May 30, 1898. Jacobsville sandstone, quarried at the Portage Entry of the Keweenaw waterway, was brought here by barge, cut and used to construct Old Main. Dedicated on January 21, 1900, It contained a dormitory, kitchen, laundry, classrooms, offices, library, chapel and lounge. The burgeoning college quickly outgrew this building, and in 1901 a frame structure, housing a gym, meeting hall and music center was erected on an adjacent lot. The frame building was demolished when Nikander Hall, named for Suomi’s founder, J. K. Nikander, was constructed in 1939. The hall was designed by the architectural firm of Saarinen and Swanson.” 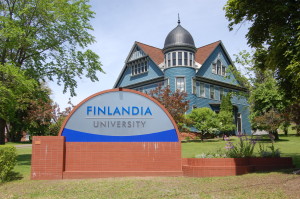 Today Finlandia University is home to roughly 600 students per year, and it offers a wide range of degrees as well as 14 varsity sports. They have one of the state’s best student-to-faculty ratios, and also have the benefit of having their campus located in a beautiful area abundant with history and outdoor recreation opportunities. 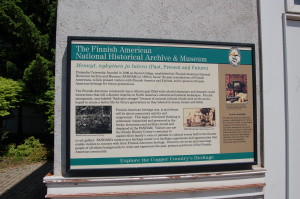 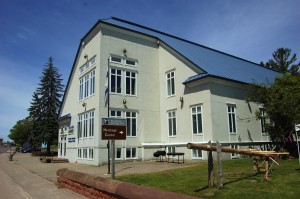 Next to the FANHAM is a monument honoring the memory of Lauri “Big Louie” Moilanen, a Finnish immigrant who was more than eight feet tall and worked in the mines and as a local bartender. He is believed to have been one of the tallest people in the world while he was alive, and the monument stands 8′ 3″, his height. the historic Hancock Town Hall and Fire Hall is located down the street at 399 Quincy St.