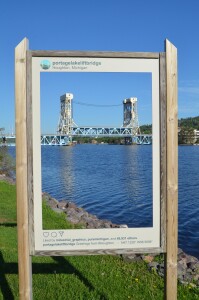 The Portage Lake Lift Bridge (Houghton-Hancock Bridge) is one of Michigan’s engineering marvels and the only connection between Houghton and the rest of the Keweenaw Peninsula. The bridge carries M-26/U.S. 41 over the Keweenaw Waterway, which is an existing river extended as a canal in the 1860s to help get the copper shipped out from Upper Peninsula mines. Portage Lake and Torch Lake are part of the waterway, which runs from McLain State Park and the Keweenaw Waterway Upper Entrance Light on its west end to Jacobsville and the Keweenaw Waterway Lower Entrance Light in the east. The bridge is one of the area’s most recognized landmarks and is celebrated each year with Bridgefest in Houghton, a weekend celebration filled with family-friendly events. The Portage Lake Lift Bridge will turn 61 years old (dedicated in June 1960; opened in 1959) in 2021 and hopes are that Bridgefest can return and celebrate the 60th anniversary of its dedication after taking 2020 off due to the coronavirus pandemic. 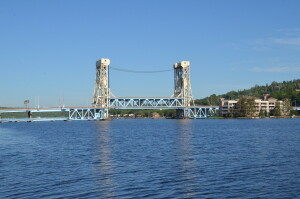 The Portage Lake Lift Bridge is 500 feet long and four lanes wide. Its deck can be lowered to a point that puts it only 4 feet above the water or raised (100 feet above the water) so that large freighters, sailboats, and other vessels can pass under it. It is the world’s heaviest and widest double-decked vertical lift bridge and while the lower deck was once used or railroad traffic it is now popular with snowmobile use in the winter months. 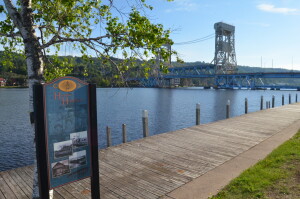 While checking out the Historic Houghton downtown walking tour we came across some information about the Houghton Waterfront and the bridge in particular: “In 1875, a wooden swing bridge was built with a pivoting center span to allow ships to pass. Soon after it opened for traffic, a slide of the Quincy stamp mill sands carried away a portion of the north end closing the bridge for another year. Due to its wooden construction and the ever increasing size of Great Lakes ships, the bridge eventually became obsolete and dangerous. In 1901, a steel bridge with a wooden swing span replaced the old bridge. The steamer Northern Wave struck the bridge and toppled the center span into the lake. Once agin the ferries were called into service while repairs were made. The use of two different building materials with varying expansion properties caused the operation of this bridge to be hampered in warm weather, while ice plagued it in cold. As automobile traffic increased, the slow operation of the swing span bridge became unacceptable and the present lift bridge replaced it in 1959.” 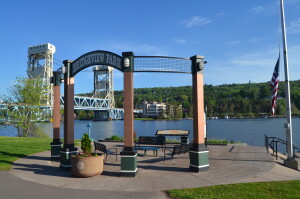 There are many great places to view the Portage Lake Lift Bridge in both Houghton and Hancock. In Houghton, Bridgeview Park on Lakeview Drive has great views and in Hancock you can see the bridge from Porvoo Park or the Hancock-Lake Linden bike path. The Portage Lake Lift Bridge is currently in the midst of a $4 million project to make structural, mechanical, and electrical improvements.