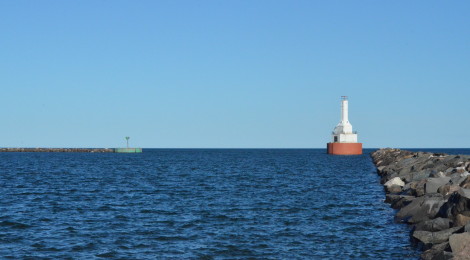 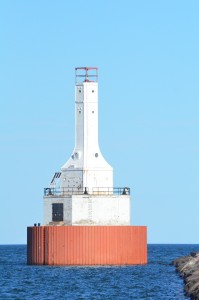 One of Michigan’s most unique lighthouses can be found in the Upper Peninsula’s McLain State Park, where the Keweenaw Waterway Upper Entrance Light marks one end of a waterway that bisects the Keweenaw Peninsula and connects to Lake Superior on both ends (the Keweenaw Waterway Lower Entrance Light marks the other end). This is a relatively new lighthouse compared to others in the Great Lakes State, as it was constructed in 1950 as the third light at this location. 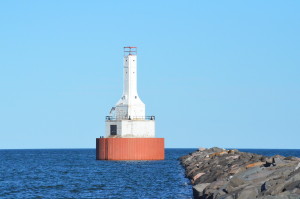 The Keweenaw Waterway became an option for ships when the Portage River was dredged in the 1860s, allowing copper from Upper Peninsula mines to be shipped out to Lake Superior ports much easier. The current Keweenaw Waterway Upper Entrance Light is 70 feet tall. Its National Register of Historic Places registry notes that it si significant “for being a well-preserved example of middle twentieth century architectural design and engineering methods used in constructing offshore lighthouses in the Great Lakes. This property includes a steel caisson foundation, concrete fog signal building, and a steel light tower that exemplifies aspects of Streamlined Moderne design.” The light has been automated since the 1970s. 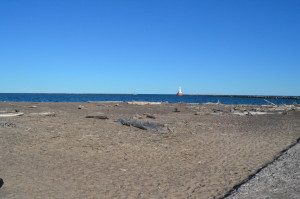 It is possible to walk out to this light for closer views – the breakwater is flat and smooth for several hundred feet and is uneven rock from that point on (use caution). McLain State Park is a popular spot for summer camping and its beach is noted for great swimming. The campground has nearly 100 sites with most being located close to the water. Sunsets over Lake Superior are another popular draw to this location. To get to McLain State Park from Hancock, follow signs and take M-203 for more than nine miles to the park entrance. Once inside the park, head left and follow signs for the parking area at the southwest corner of the park.