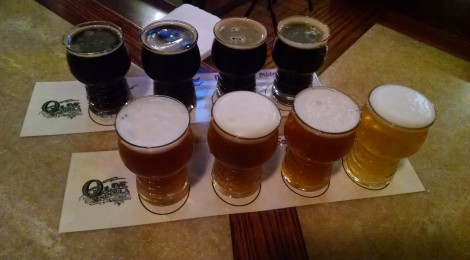 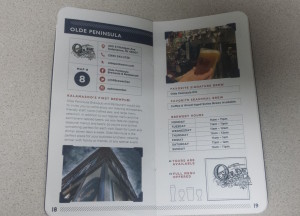 For the third year in a row, we headed south to Kalamazoo to check out more amazing Michigan breweries for Kalamazoo Beer Week. This event-packed celebration of the local beer scene takes place each January – find out more at http://www.kalamazoobeerweek.com/. Since 2015, we’ve been working on collecting stamps for our Discover Kalamazoo Give A Craft beer passports (12 total breweries), and by the end of this year’s visit we were able to finish that quest – we’ll be back soon to collect our swag. Check out the seven stops we visited this year to learn a little bit about the beers we tried, which beers we liked best, food and entertainment options and more. Head over to http://www.discoverkalamazoo.com/drink/beer/give-a-craft-beer-trail/ for all the details on how you can get your own passport and start checking out all of Kalamazoo’s great breweries! 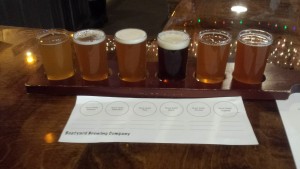 Boatyard Brewing Company – We started off on the north side of town at Boatyard Brewing Company. A flight of IPAs was a great way to kick things off, showcasing six different variations of the brewery’s Rock Solid IPA. This flight included the original, a session, a red, a black, a double and an imperial version – my personal favorite was the Rock Solid Red. We also enjoyed and amazing pear saison (Lady Has A Pear) and the Raisinette Caine, an oatmeal raisin stout. 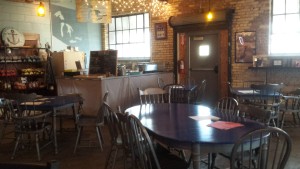 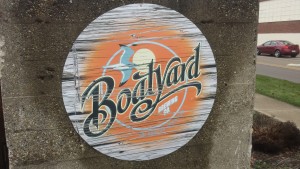 The friendly, laid-back atmosphere here was fantastic and we were fortunate to also get a tour through the brewing area in back. Food is available for order at “The Galley” inside the brewery. Boatyard cans several of its beers, and they can be purchased at the brewery or in select retail locations across the state. Find out more at http://boatyardbrewing.com/. 432 E. Paterson St. 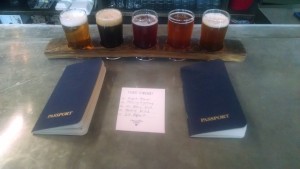 Arcadia Ales – Our next stop was at the Arcadia Ales Kalamazoo location. We had visited the Battle Creek location before, but this was our first visit here and we were blown away with how nice this building is – spacious and open, with a large bar inside and an outdoor beer garden that includes frontage on the Kalamazoo River and is close to walking and biking paths. (we definitely need to come back in the summer!). We tried Right Bower (a solid a session IPA), Morning Nightcap (a delicious coffee porter), Battle Kriek (a fantastic wild ale), MI Berry Vice (a tart raspberry/blueberry fruit beer) and 2X Export (an export-style bitter that is a collaboration with Wadworth Brewery in England). 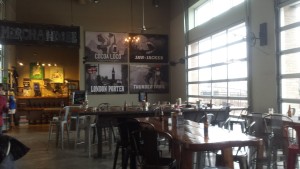 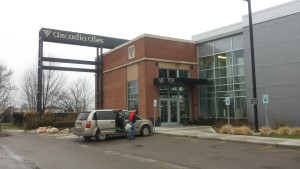 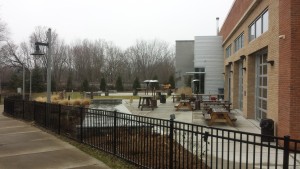 We enjoyed every beer we had here, with the Battle Kriek and Morning Nightcap being our two favorites. Arcadia Ales also offers food, weekly specials, a stage for live music and a merchandise store. Find out more at http://arcadiaales.com/kalamazoo. 701 E. Michigan Ave. 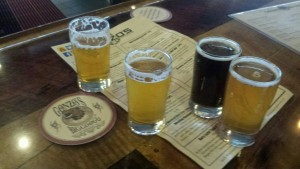 Gonzo’s BiggDogg Brewing – For our third stop, we made a return visit to Gonzo’s to try some new beers and grab some food. Out of the four beers we tried, the Missing Numbers schwartzbier was our favorite, followed closely by the Magic Trick hefeweizen – a silver medal winner at the 2016 World Beer Expo. For food, we had an order of poutine and a very tasty burger. If you need more Gonzo’s beer to take home you can get a growler filled or grab a four-pack of select cans. Find out more about this brewery at http://gonzosbiggdoggbrewing.com/. 140 S. Westnedge 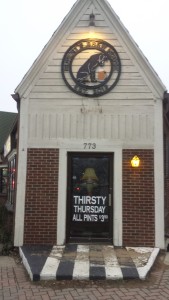 Rupert’s Brew House – After Gonzo’s we took a walk down Academy St. to Rupert’s Brew House. During our quick visit here we tried the Boogie Brown, Peanut Butter Porter, Stooby’s Stout and Double HighPA. The brown was the clear standout for us and we got a crowler to take home.

Tibbs Brewing Company – For our fifth stop we made a return trip to Tibbs Brewing Company, and once again got to check out a beer and hop cheese pairing. Pretzels and pita bread were provided, alongside three cheeses and three Tibbs brews: a gouda blend paired with the Ben Jonesin’ Chocolate Toffee Porter (one of our favorite beers from the 2016 MI Brewer’s Guild Winter Beer Fest), Common Law cheddar cheese paired with the Common Law IPA, and a mango habanero goat cheese paired with the Celery City American Wheat. Head over to https://www.facebook.com/TibbsBrewingCompany for more information. 402 S. Burdick St. 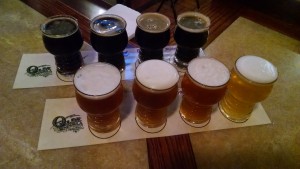 Olde Peninsula Brewpub – Our next stop found us visiting one of the area’s first brewpub, the Olde Peninsula Brewpub in the heart of downtown. The beer here was absolutely amazing and we enjoyed sampling many different styles while munching on fried pickles and the house specialty brewpub dip and chips. We tried the OP IPA,  Mango Ghost Pepper IPA, Sassafras Wood Aged OP IPA, Blueberry Cream Ale, Vanilla Porter, Gingerbread Porter, Peanut Butter Stout Chocula and Midnight Stout. Out of this sampler flight the Mango Ghost Pepper IPA (one of the best spicy beers I’ve ever had), the Sassafras Wood Aged OP IPA and Peanut Butter Stout Chocula stood out as our three favorites. Olde Peninsula has a full menu, frequent specials, and they host a Wednesday night euchre tournament. Find out more at http://oldepenkazoo.com/. 200 E. Michigan Ave. 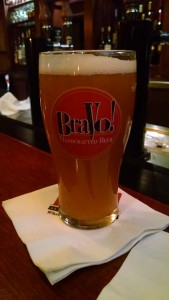 Bravo! Restaurant and Cafe – Our final stop for the night took us to Portage near the airport, where Bravo! Restaurant and Cafe offers several house made beers along with a full food menu. We were blown away by both the Holy Molee Imperial Stout (chocolate, coffee, cinnamon, clove, pepper, 10% ABV) and the A Galaxy Far, Far Away (pale ale with passionfruit, peach and citrus). We’d like to thank the bartender, Allison, for great service and wonderful conversation despite the fact that we came in so close to closing time! http://bravokalamazoo.com/ 5402 Portage Rd.