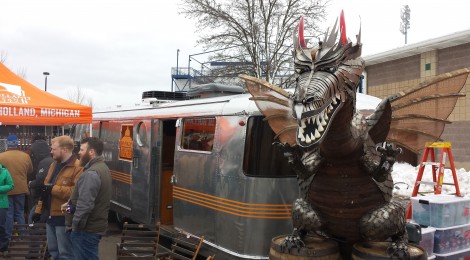 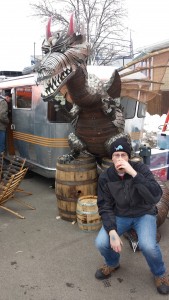 On Friday, February 26th we bundled up and headed to Fifth Third Ballpark in Comstock Park for our first time at a big beer festival. This was the kickoff day for the 11th annual Michigan Brewer’s Guild Winter Beer Festival, and more than 100 Michigan breweries were on hand pouring samples of close to 1000 different beers. 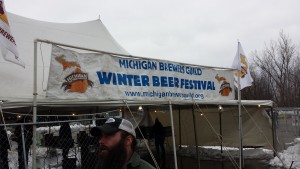 The winter season brought out a lineup that was heavy on stouts, porters, coffee beers, and barrel aged beers. We tried to visit as many new breweries as possible, which meant skipping the big boys (Founders, Short’s, Bell’s) and other breweries we had recently visited (Harmony, Latitude 42, Railtown, Newaygo). 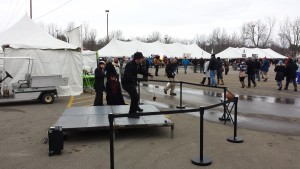 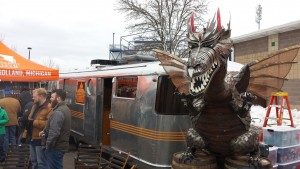 We tried more than a handful of beers, so we decided to put together lists of our favorites. We’ve also mixed in some pictures of ice carvings, beer tents, etc. The Winter Beer Festival also offered live music entertainment, ice carving demonstrations, food, and more. 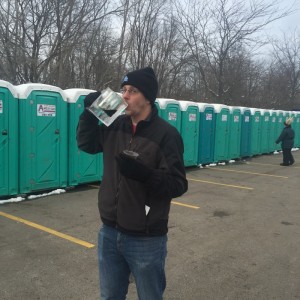 Coffee Double Crooked Tree, Dark Horse Brewing Co. (Marshall) – This was already one of the better double IPAs on the market, and the addition of coffee made it amazing. Dark Horse also had variants with blood orange, blueberry, or hot pepper.

Mug Shot Oatmeal Coffee Stout, Frankenmuth Brewery (Frankenmuth) – There were more than a handful of coffee beers on tap, and this one stood out above the rest.

James’ Giant Peach Gose, Gravel Bottom Craft Brewery & Supply (Ada) – Sour beers continue to grow in popularity and we tried a handful of them at the festival. This was by far the best one with an excellent balance of peach flavor and tartness.

Cranberry Rebellion Mead, The Hideout Brewing Co. (Grand Rapids) – We love a good mead, and had already tried The Hideout’s delicious Rebellion Mead. The addition of cranberry made it even better and made this the standout of the day in the mead category.

Benevolence, Big Lake Brewing Co. (Holland) – This one was a pleasant surprise, a bourbon barrel aged imperial stout that packed 10% ABV and plenty of flavor. This was a perfect winter beer, and it really helped warm us up.

Sage Lime Witbier, B. Nektar (Ferndale) – B. Nektar is legendary for their award-winning meads, but what impressed us most were the beers they had on tap at the festival. The Sage Lime Wit had a unique mix of sage and lime flavors, was well balanced, and also crisp and refreshing.

BA Imperial Mayan Mocha Stout, Odd Side Ales (Grand Haven) – It wouldn’t seem like Odd Side could do much to improve on an amazing stout that is brewed with coffee, nutmeg, cinnamon, and habaneros – but then they aged it in bourbon barrels! It still had the expected amount of heat, but gained quite a bit of barrel character making it a powerful yet tasty brew.

5 “New To Us” Breweries That Impressed:

B. Nektar (Ferndale) – Zombie Killer was amazing, but what impressed us most about this well-known meadery was that they also brought along some amazing beers. We already mentioned the Sage Lime Witbier above, but we also enjoyed the Mexican Chocolate Porter. Can’t wait to try more from B. Nektar!

Big Lake Brewing Co. (Holland) – The barrel aged Benevolence made our top 10 list for the day, and as Big Lake continues to see distribution of their cans expand, they’re a brewery worth keeping an eye on. They also brought along MTM Session IPA (with Amarillo), Ryecoe IPA (Rye IPA), Darkstar Stout (Chocolate Coffee Stout), and Nerd Fury (Pale Ale). 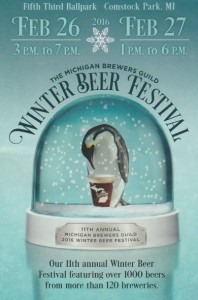 Find out more about other Michigan Brewer’s Guild events at http://www.mibeer.com/. Enthusiast memberships get individuals in to events an hour early and VIP opportunities.