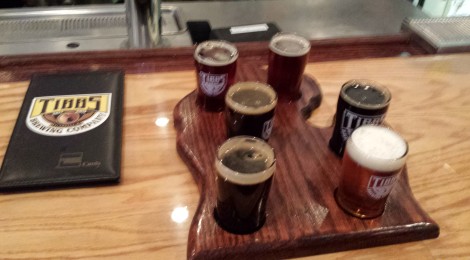 We had been looking forward to visiting Tibbs Brewing Company for a while, but it wasn’t until we sat down at the bar that we found out just how fortunate we were to be able to visit during Kalamazoo Beer Week. Water lines above the brewery had burst earlier in the week and done some significant damage to the brewery, causing them to cancel a few KBW events. We were the only people there when we arrived, which ended up being a great chance for us to talk with owner and brewer Kevin Tibbs, who was incredibly engaging, entertaining and very good at brewing beer. We’ve come really treasure experiences like this, talkin beer with the people who make it and hearing about the stories behind their breweries and what they offer.

We ordered up a flight of six beers to get started, and as you can see this brewery has possibly the best flight presentation in the state! Citra Your Ass Down was an excellent, flavorful IPA that I could see myself drinking a few of any night. The G’Morning Coffee Stout was fantastic – we’ve been really enjoying coffee beers lately and this stacks up well with any we have had to date. The G’Night Stout also presented great flavor, and the Burdick Brown was also enjoyable. For Richer or Porter was yet another great brew, and we finished this flight off with an A-Tibbical Pale Ale, a very flavorful pale that was also smooth and easy-drinking.

By the time we were ready to move on to our second flight, things had really picked up. Numbers grew steadily from the two of us to four, to seven and eventually 25-30 people. Mr. Tibbs handled this all incredibly well, making sure everyone was able to get their hands on a delicious beer (or five). We even had a chance to meet “Beer,” an unofficial mascot of sorts for the beer week festivities.

In the second flight we decided to try out the five remaining beers that were available. The Common Law IPA and Lovell Double IPA were two more examples that Tibbs really knows his way around good, hoppy beer. The Hell-Jen Belgian Tripel and Dark Belgian Strong were the two strongest beers on tap, but were so smooth and balanced that they didn’t come across as too strong. The final beer we tried was an amazing concoction called a “beermosa” – the Belgian Tripel mixed with carbonated orange juice. The mix of a strong, complex beer like this paired with half orange juice proved to be a pretty unique taste but one that we’d definitely be interested in trying again.

We also had the opportunity to partake in a KBW event that featured cheeses from HopHead Farms (in nearby Hickory Corners) that had been made with four different kinds of hops and paired with Tibbs beer. The porter paired with a smoke gouda, Common Law with a sharp cheddar, coffee stout with a smoked cheddar and the Belgian Dark Strong paired with gorgonzola all presented great flavor and a great snack (with various kinds of pretzels and bread) to munch on while sampling beer.

Tibbs is still a pretty new player in the Kalamazoo beer scene, but they offer some pretty fantastic beers. They also have a great location downtown next to the State Theatre, and will have no problem continuing to grow. They don’t currently offer growlers to go but hope to in the future once they are able to increase production – and we’ll definitely be back to fill one up with their coffee stout!