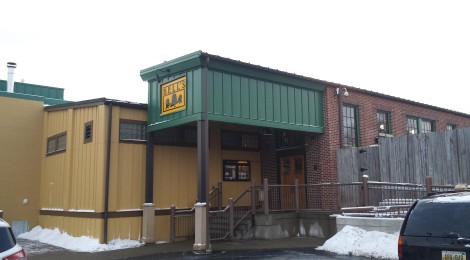 Michigan is home to some of the nation’s top beers, and a few breweries that are considered “must-visit” for beer enthusiasts. In Grand Rapids it’s Founders Brewing Co., in Detroit it’s Atwater Brewery, and Kalamazoo it’s Bell’s Brewery. During Kalamazoo Beer Week in January, we stopped by Bell’s Eccentric Cafe to have dinner and check out some of the beers that are only available there. 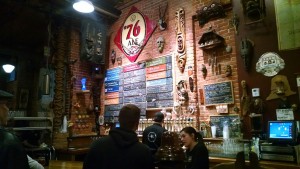 Oberon, Porter, Winter White Ale, Kalamazoo Stout, Two Hearted Ale and Hopslam are just a few of the beers that have vaulted Bell’s to nationwide prominence. Most of the production these days is done out in Galesburg, but the cafe in downtown Kalamazoo still offers an amazing selection of beers and a tasty food menu. This location is so popular among beer enthusiasts that it ranked in the top 15 venues (14th overall; only other MI location was Founders) in the world for Untappd users:

Top Venues in the World on @untappd in 2015, which ones did you hit up? @foundersbrewing @wickedweedbeer @3floyds pic.twitter.com/W3y6rAgQZX

We were impressed with the tap list, which featured eight beers that we had never tried listed as cafe-only brews. That is, until our server told us to flip the beer menu over…and there we found 17 more options! Stouts, sours, Belgian-style brews, coffee beers and more were all on this list, so we picked out eight beers (two flights of 5 oz. samples) to try out while we waited for the rest of our group to arrive for dinner. 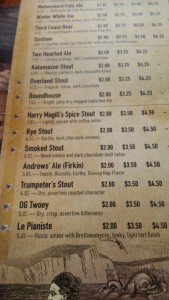 As you can see from the picture below, we got to try out quite a few dark beers. We were incredibly impressed with Harry Magill’s Spiced Stout, the Smoked Stout, Trumpeter’s Stout, and Bear Hug (Imperial Stout). Each of these four beers presented a unique yet pleasant flavor, though coming from the people who make Kalamazoo Stout and Expedition Stout that was not much of a surprise. It’s clear that Bell’s has a handle on stouts, and being able to try out these variations was a great way to get things started. 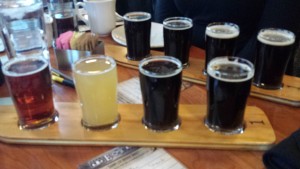 A second flight brought more interesting and unique beers as we tried Milchkaffee (coffee stout), Sweet Potato Stout, L’Appel Du Vide Pear (Sour Ale), and Roundhouse IRA (Imperial Red Ale). The Milchkaffee was incredibly impressive, and easily ranks as one of the best coffee beers we’ve ever had. I also can’t say enough about the Roundhouse IRA. We found the Soft Pretzel Bites to be a great appetizer to go along with our flights. 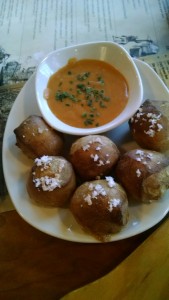 Once the rest of our party arrived we ordered dinner, which included a caesar salad, grilled trout, and pork tacos. Everything was delicious and arrived in a timely manner. A final flight of beer was ordered with our dinner, which allowed us to try the Overland Stout, Le Pianiste (Bier de Garde), Thump Yer Pumpkin, and Dagger Stout. As far as pumpkin beers go, the Thump Yer Pumpkin is one of the best we’ve had. 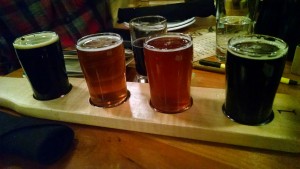 The atmosphere at Bell’s Eccentric Cafe is incredible, and for beer lovers this is close to paradise. If you’re a fan of Bell’s beer, you’ll want to stop here and try out some of the beers you can’t get anywhere else. If you’re just getting in to craft beer, there’s sure to be something here that you will enjoy. There’s also a live music venue that frequently brings in nationally known acts, you can find the schedule and ticket information at: http://bellsbeer.com/eccentric-cafe/events-calendar/. Bell’s General Store is located on the other side of the building and features to-go beer and merchandise. Additional parking is available across the railroad tracks off of E. Willard St.