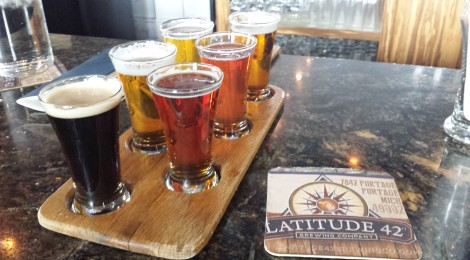 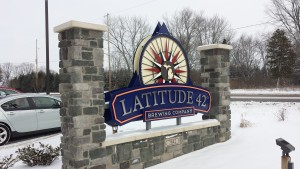 Last week we had the chance to head south and check out a couple breweries during Kalamazoo Beer Week 2016. Our first stop was Latitude 42 Brewing Company in Portage, a microbrewery that produces award-winning beers and offers a solid selection of comfort food. They have been open since 2013 and are continuing to grow their brand thanks to six-packs of their canned beer being available in most retail outlets across the state. We were immediately impressed with how spacious the interior is, and we grabbed seats at the bar and ordered a flight of six beers. 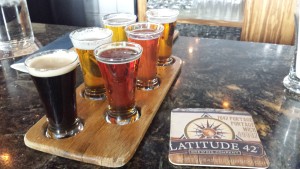 We started of with El Diablo, a chili beer that was flavorful with the right amount of hear. We also tried Cosmic Charlie’s Pale Ale, Island Fever (Coconut Milk Stout), Batch 420 (Hop Hash IPA), Tinder Bock (Winter Weizenbock) and a J.K.’s Northern Neighbour (Saskatoon Cuvee), a cider from Flushing, Michigan. I really enjoyed the Tinder Bock, Island Fever was smooth and had an excellent flavor balance, and the cider was delicious. 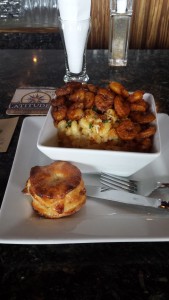 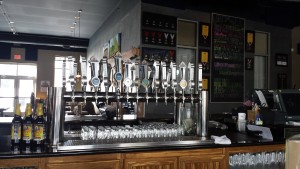 Turning our attention back to brews, we next tried Flavor Savor – a delicious Imperial IPA. Spank Dog Pale Ale was a great example of an American Pale Ale while The Little Guy was everything an English Pale Ale should be. We were both impressed with the flavor of Lilikoi Wheat – a passion fruit infused beer. Lucifer’s Cuvee (Oatmeal Stout) was simply amazing, as it was not overpowering despite its 8.4% ABV but full of chocolate flavor. You can smell the chocolate when putting this beer to your lips, and once you taste it, it definitely doesn’t disappoint! The Barley Wine was fantastic, and it was easy to see why it was a silver winner at last year’s North American Beer Awards. 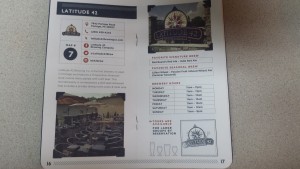 Finally, we tried Red Beard’s India Red Ale and I.P. Eh, two beers that were flavorful and packed with hops. I loved them both, and I’m pretty excited that they’re easy to find in cans around here. We took home a growler of Powerline Porter, a robust and tasty porter that we had previously tried on draft at a restaurant in Grand Rapids. 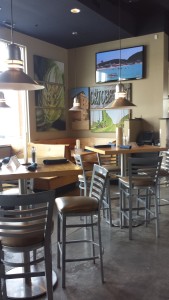 Latitiude 42 Brewing Company was a great start for our Kalamazoo beer adventure. Our bartender Heather was friendly and engaging, and incredibly knowledgable about all of the beers on tap as well as the food. We really can’t say enough positive things about her, and she was a big part of why our visit was such a great experience. 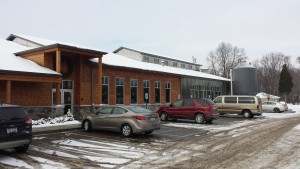