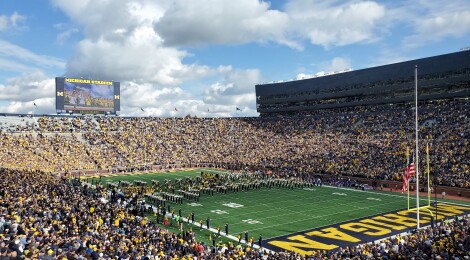 21 Michigan Places We Visited for the First Time in 2021 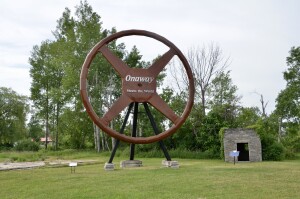 Each year we set out to visit as many new places in Michigan as we possibly can. The last two years have presented some challenges on this front, but we’ve still managed to do pretty good. This year we did so well that I had to trim a few places off the list to narrow it down to our 21 favorites. We were fortunate to see two “new to us” Michigan lighthouses, visit a few state parks we hadn’t been to before, stop by some of Michigan’s oldest churches, and visit a handful of Michigan breweries. 2022 should present us with some awesome opportunities to see even more new places in the Great Lake State, and we can’t wait to share them with you when we do. Here’s a look at 21 Michigan Places We Visited for the First Time in 2021: 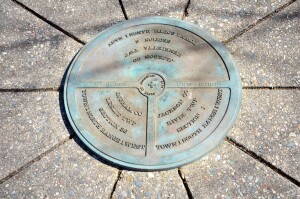 Meridian Baseline State Park (March) – “Michigan is home to more than 100 state parks, and Meridian Baseline State Park is one of the most recent additions. This small yet beautiful park is home to the two markers that helped lay out the boundaries from which early Michigan land surveys began. This park opened to the public in 2015 and is home to a beautiful trail through the woods, and short paths that lead to the North and South initial points where they meet the Michigan meridian. 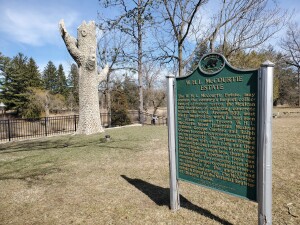 McCourtie Park, Somerset Center (March) – “One of Michigan’s most unique small town parks can be found in Somerset Center in Hillsdale County. McCourtie Park feature 17 bridges built with concrete made to look like wood, as well as intricate birdhouses, benches, fake trees, and more. While the house that once stood here is gone, legends about its ties to Prohibition and the mafia still live on. We recently had a chance to visit McCourtie Park, and today we share some pictures from our visit.” 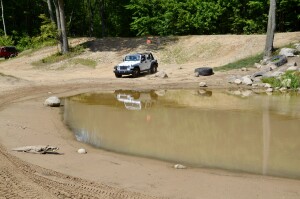 Rocks and Valleys Off Road Park, Harrison (September) – Jon got his first taste of a joining some friends in Jeeps on an off road course in September when he visited Rocks and Valleys. “The park has over 200 acres of hills, rocks, mud and a variety of trails for different skill levels.” Look for more information on this awesome park before they open back up in April! 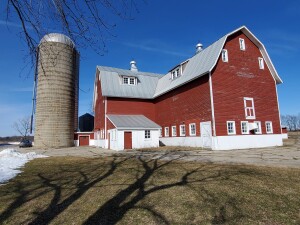 Eastmanville Farm, Ottawa County Parks (March) – “This park is home to miles of trails for hiking and equestrian use, a historic barn and farm (complete with goats), and the Poor Farm Cemetery.” We enjoyed a visit hiking the trails here as the snow had started to melt, there is a lot of history here as well. 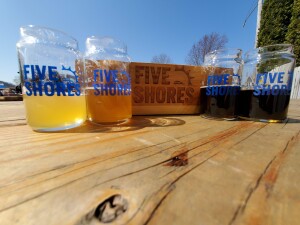 Five Shores Brewing, Beulah (April) – An early spring weekend stay in Beulah gave us a chance to check out our first new Michigan brewery of the year. Five Shores hasn’t been open long, but they’re already showing they know how to produce some outstanding beers. We enjoyed Haze Rd. (DDH New England IPA), Scoop (stout brewed with cocoa nibs and vanilla beans), and the Siren of Pastry Stout (stout made with whole sweet potato pies). 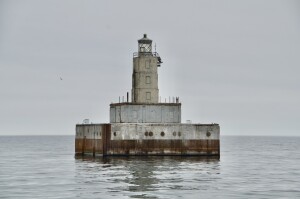 Lansing Shoal Lighthouse (June) – A Shepler’s Westbound Lighthouse cruise in June allowed us to see two lighthouses we had never been to before. “The shoal in northern Lake Michigan that this lighthouse warns mariners of was once marked by a lightship, and then by a different lightship. It wasn’t until 1926 that funds were appropriated to build a permanent lighthouse here, and after nearly two years of construction the light was turned on for the first time in October of 1928.”

Squaw Island Lighthouse (June) – The other “new to us” lighthouse on the Shepler’s cruise was the Squaw Island Lighthouse, which sits on a privately owned island in Lake Michigan. “The lighthouse is located on the north end of the island, and views from the water are decent but limited due to the tree cover. The tower is 53 feet tall and attached to a two-story keeper’s dwelling. Considering its remote location, a lot of work went into making this a beautiful structure with great attention to detail. Waters near the island get as shallow as six feet, which was one of the main reasons to warn passing vessel traffic.” 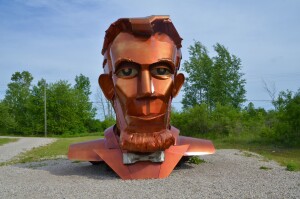 Awakon Park, Onaway (June) – We made a quick detour from Cheboygan down to Onaway on a June trip, hoping to finally visit Awakon Park. This sculpture park that features the work of Tom Moran as well as the ruins of the American Wooden Rim factory did not disappoint. We’re also glad to have visited when we did, as we have since heard that the sculptures were removed from the park due to vandalism. 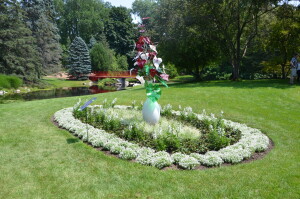 Dow Gardens, Midland (July) – We finally made a trip to Midland and braved Dow Gardens on a hot holiday weekend. What an incredible place! We loved exploring the Whiting Forest and its canopy walk, the Rose Garden, the Garden of Glass exhibit, and the Dow Home and Studio. The flowers here were beautiful and there are many sculptures throughout Dow Gardens’ 110 acres. 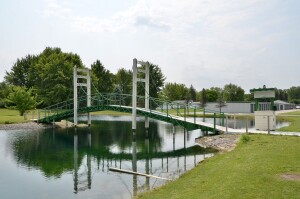 Mini Mackinac Bridge, St. Louis (July) – We love finding new and unique Michigan roadside attractions, and it doesn’t get much better than this. “Much like the Little Mac Bridge in Reed City, this is a Mackinac Bridge replica that is easy to visit and walk across. The pond that serves as a replica Lake Michigan and Lake Huron here is full of fish and turtles, and the land on the other side of the bridge is shaped like the Lower Peninsula.” 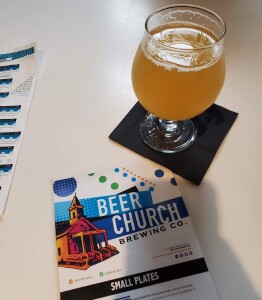 Beer Church Brewing Co., New Buffalo (July) – When we started looking at visiting seven new breweries in Michigan this year to bring my personal total to 200, Beer Church Brewing Co. was near the top of the list. This newer brewery in an old church in New Buffalo has great food and delicious beer, which might explain its out-the-door waits on summer weekends. We loved the Pontius Pilate (New England IPA) and Midnight in a Perfect World (a 17% ABV American Imperial Stout). 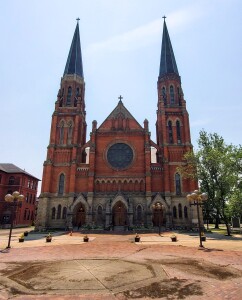 Basilica of Sainte Anne de Detroit (July) – We made two visits to Detroit this year and were awestruck by the beauty of the second oldest continually operating Catholic Church in the United States. The architecture of the current church building, which dates back to the 1880s, is absolutely stunning. On our second trip to the church we were even able to get a brief tour of the interior, including the side chapel where Father Gabriel Richard is interred. 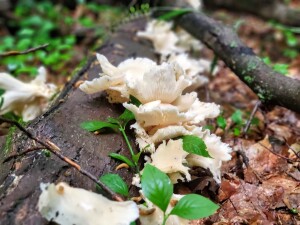 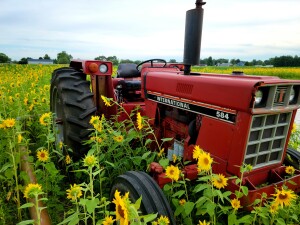 Liefde Farms (July) – After several years of seeing fantastic photos in sunflower fields we finally went and checked one out for ourselves in July. Liefde Farms in Zeeland is open to the public (donations suggested) each year for the few weeks that its fields are fully in bloom. We got some great shots here and had an incredible time! 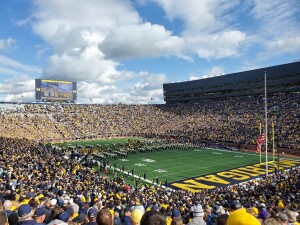 Michigan Stadium, Ann Arbor (October) – Jon finally got to visit the Big House! On October 23rd, I was part of a crowd of 100,000+ that saw the Wolverines thrash the Northwestern Wildcats by a 33-7 score. 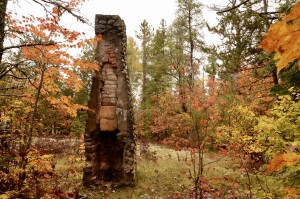 Camp Raco ruins, Chippewa County (October) – It was great to finally locate the ruins of Camp Raco on a fall color trip in the Upper Peninsula. According to the Hiawatha National Forest: “Camp Raco was the first CCC camp in the Upper Peninsula. It was home to Company 667, which was organized in April, 1933 with 200 enrollees from Detroit and Hamtramck. Official designation as Camp Raco F-5 occurred in summer, 1933. Work by enrollees at Camp Raco included tree planting, truck trail construction, telephone construction, stream improvement, campground construction, fish planting and fire presuppression. By 1942, when Raco was the only camp left on the district, its fire protection area covered 151,140 acres. After the camp closed, the facilities were used during World War II as a German prisoner of war camp.” 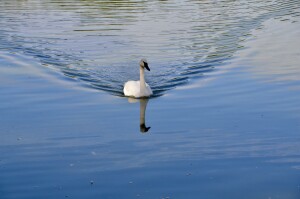 W.K. Kellogg Bird Sanctuary, Augusta (September) – “Located just 15 minutes from both Kalamazoo and Battle Creek, the W.K. Kellogg Bird Sanctuary offers an escape from city living as well as a chance to get up close and personal with hundreds of waterfowl. Several trails wind through the grounds, and visitors are even able to purchase corn and feed the swans, ducks, and geese that hang out in and around Wintergreen Lake. Part of the Michigan State University W.K. Kellogg Biological Station, the bird sanctuary serves as an outdoor classroom and a safe haven for birds and other animals.” 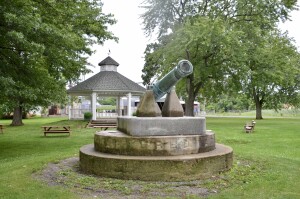 The Dewey Cannon, Three Oaks (July) – One of our most-viewed posts of the year ended up being from our visit to the Dewey Cannon in Three Oaks. “The Michigan historical marker in the park reads: “This cannon, captured in the Spanish-American War by Admiral Dewey, was presented to Three Oaks when its citizens raised $1,400 for a memorial to the men of the battleship Maine. This was the largest contribution, per capita, of any community in the nation. “Three Oaks Against the World,” a local paper proudly boasted. This park was dedicated October 17, 1899, by President William McKinley, and others. Presentation of the cannon took place on June 28, 1900. Guest of honor was Helen Miller Gould, called the Spanish-American War’s “Florence Nightingale.” Thousands of people were in attendance on each occasion.” 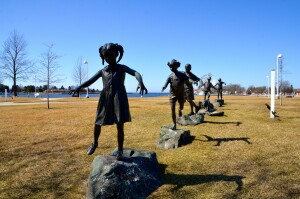 Mason County Sculpture Trail (April) – During a weekend in Ludington we tracked down more than 20 sculptures. “The city hosts parts of six different cultural trails that cover Mason County, including the Mason County Sculpture Trail. Ludington’s Waterfront Park hosts nine of the sculptures on this trail, and of the 20-plus total pieces that are currently part of the trail all but four of them are located in the downtown area.” 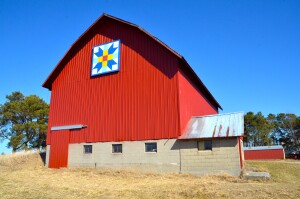 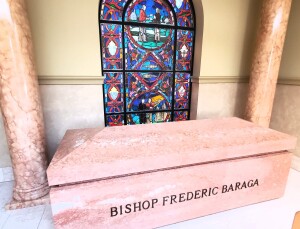 Bishop Baraga Chapel at Saint Peter Cathedral, Marquette (May) – One of the most notable churches in the Upper Peninsula is also the final resting place of Bishop Frederic Baraga. After having visited the many historic sites from Baraga’s life and travels throughout Michigan, it was humbling to visit the chapel where he was interred. If you visit you will also be impressed by the stained glass windows (as well as the architecture of the entire church).