Browse: Home   /   Arts and Entertainment   /   Awakon Park in Onaway is a Sculpture Park That’s Worth the Detour 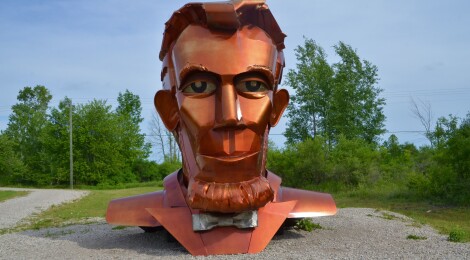 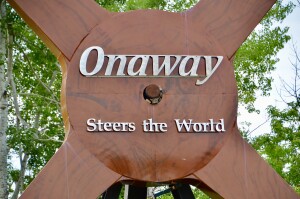 Onaway is a small city (less than 1,000 residents) in northeast Michigan that is home to one of the coolest roadside attractions we’ve found in the Lower Peninsula. Awakon Park is home to the sculptures of Tom Moran and a walking trail that winds through the ruins of the American Wood Rim Company. This wonderful park is free to everyone and offers a look back into Onaway’s history. We had the chance to visit recently while staying in the Cheboygan area, and loved everything about this park. It may not have quite as many sculptures as Lakenenland in the Upper Peninsula, but the combination of sculpture art, history, and accessible old ruins made this an instant favorite. Today we will share some photos from our visit, directions for when you visit, and some of the history of Onaway.

If the name Tom Moran sounds familiar, it may be because we have previously featured some of his other works. He is responsible for both Big Gus (the world’s largest working chainsaw) and Big Ernie (world’s largest working rifle) at Da Yoopers Tourist Trap in Ishpeming, a Bald Eagle sculpture in front of the Besser Museum in Alpena, the “Community Connected” sculpture at McLaren Hospital in Cheboygan, the Liberty Torch in Rogers City, and more. We had previously seen the Gerald R. Ford sculpture that is at Awakon Park in 2012 when it was in Grand Rapids for ArtPrize, and again in 2013 when it spent the summer on Mackinac Island near the Boy Scout Barracks behind Fort Mackinac. Moran Iron Works has been busy in recent years, working on two new Shepler’s Mackinac Island ferry boats, the new Lowell Showboat, and the new Kayak Express boat for Pictured Rocks Kayaking in Munising. 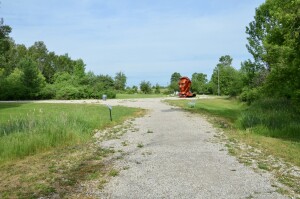 Highlights of Awakon Park include large sculptures of Abraham Lincoln, Gerald R. Ford, and the “world’s largest steering wheel.” For those keeping score at home, that gives Mr. Moran claim to at least three of the world’s largest things found here in Michigan (look for Part 3 of our World’s Largest in Michigan series soon). A sign near the parking area gave us a bit of background history of the American Wood Rim Factory, and other signs placed along the trail denote what some of the structures were and what part they played in the manufacturing process. “At the turn of the twentieth century, our historic town of Onaway, Michigan came to life amidst its vast supply of timber forests, lumber camps, and saw mills and the use of this timber in the production of two historically significant wood products: the wooden bicycle rim and the wooden steering wheel. “Onaway Steers the World” became our proud heritage and motto, thanks to the vision and steadfast work of entrepreneur Edward James Lobdell and the American Wood Rim Company.” One amazing thing we learned was that by 1905 the factory was making 65% of wooden bicycle rims globally! Enjoy these great pictures of Awakon Park, and check out the map and additional information at the bottom of the post. We promise Awakon Park is worth a detour if you’re headed to Mackinaw City, Cheboygan, Rogers City, or Alpena this summer!

Moran Iron Works is located about a mile west of the park, and in a large field you will see another sculpture. This bust of George Washington was one of Moran’s early works from 1998. 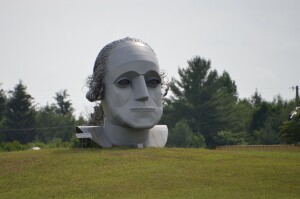 A 32 foot long steel sturgeon that is another of Moran’s pieces used to reside in Onaway at the corner of M-68 and M-211 honoring the city’s other nickname as the “Sturgeon Capital of Michigan.” We looked for it when we visited without success, later finding out that it has moved to Indian River – we will be looking for it on our next trip North! The map below will help you find Awakon Park, look for the entrance drive just west of Subway and the car wash.