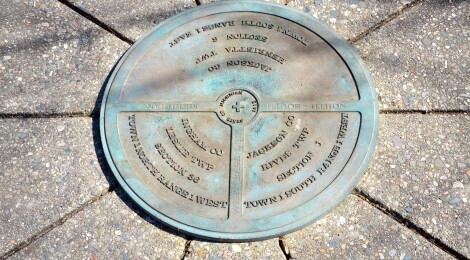 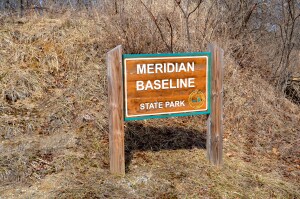 Michigan is home to more than 100 state parks, and Meridian Baseline State Park is one of the most recent additions. This small yet beautiful park is home to the two markers that helped lay out the boundaries from which early Michigan land surveys began. This park opened to the public in 2015 and is home to a beautiful trail through the woods, and short paths that lead to the North and South initial points where they meet the Michigan meridian. 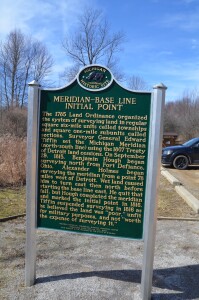 A Michigan state historical marker in the parking lot dives deeper into the site’s history: “The 1785 Land Ordinance organized a system of surveying land in regular square six-mile units called townships and square one-mile subunits called sections. Surveyor General Edward Tiffin set the Michigan Meridian (north-south line) using the 1807 Treaty of Detroit land cessions. On September 29, 1815, Benjamin Hough began the surveying north from Defiance, Ohio. Alexander Holmes began surveying the meridian from a point 78 miles west of Detroit. Wet land caused him to turn east then north before starting the base line east. He quit that fall, but Hough completed the meridian and marked the initial point in 1816. Tiffin suspended surveying in 1816 as he believed the land “poor” Unfit for military purposes and not “worth the expense of surveying it.” 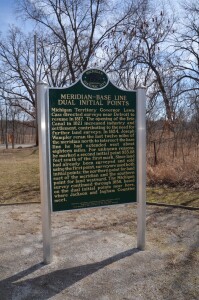 It continues on a second side, explaining why there are two points here: “Michigan Territory Governor Lewis Cass directed surveys near Detroit to resume in 1817. The opening of the Erie Canal in 1821 increased industry and settlement, contributing to the need for further land surveys. In 1824, Joseph Wampler reran the last twelve miles of the meridian north to intersect the base line he had extended west about eighteen miles. For unknown reasons, he marked a second initial point 935.88 feet south of the first mark. Since land had already been surveyed and sold using the first point, surveyors used both initial points: the northern point for land east of the meridian and the southern point for land westward. The Michigan survey continued through 1856, based on the dual initial points near here, where Jackson and Ingham Counties meet.” 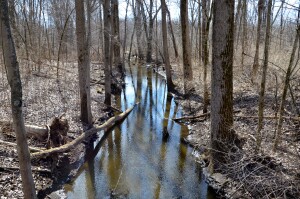 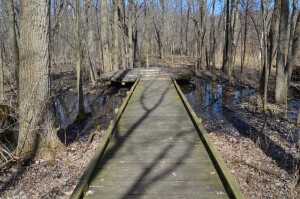 The hike to the initial point markers is about a mile and a half round trip, with a well-worn and clearly marked path traveling through the woods and over a small creek. Each of the initial point markers is well preserved and secured in a small monument. Due to this park’s location, it sees very light traffic compared to other state parks. we were very impressed with how well everything is signed and marked, as well as how clean the path was. If you’re headed to the Jackson area and looking for a little bit of unique Michigan history, be sure to stop at Meridian Baseline State Park!