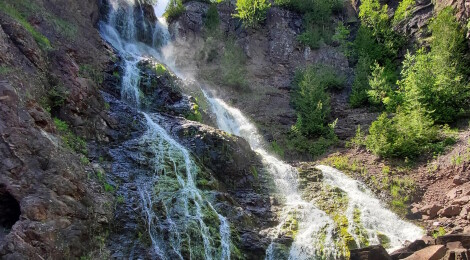 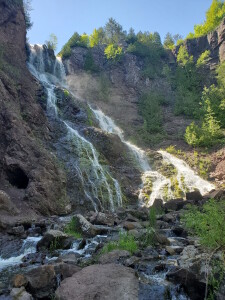 We’ve been all over the Upper Peninsula looking for waterfalls for more than 20 years now, and in the summer of 2020 we finally checked a big one off the bucket list – Douglass Houghton Falls in Lake Linden. With a drop of 110 feet this is Michigan’s tallest waterfall. At one point the private landowner would let visitors view this fall on his property, but after a few accidents that was no longer an option. In 2018, the Michigan DNR purchased the property surrounding the falls with plans to turn it into a state park and veterans memorial park. While we waited for those plans to be finalized and move forward, we continued to see pictures of this amazing waterfall posted in Upper Peninsula Facebook groups, on Michigan tourism sites, and more. After deciding to try and find a legal way to visit this waterfall, we eventually found a route that follows Hammell Creek upstream from a local trail. This was one of the highlights of our summer vacation, and while we can’t openly endorse anyone else trying to reach these falls, we do know that everyone will want to visit once the state park finally opens. 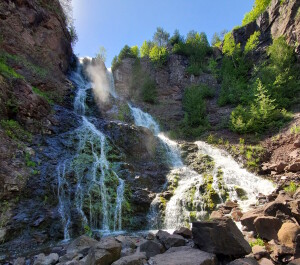 As M-26 heads west out of Lake Linden it makes a sharp turn and then crosses under what looks like an old railroad bridge. This bridge now carries an ATV trail over the highway, and from looking at some maps we noticed that the trail eventually crosses Hammell Creek. We parked by the bridge and hike up to the trail, following it to Hammell Creek. 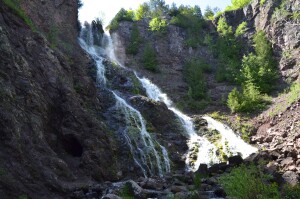 It was a bit of a surprise to see a very well-worn path parallel to the creek. We took this as a good sign that many had reached the falls this way before us, and after checking around for any possible posted “no trespassing” signs, we headed towards the falls. The path ended up being great in most sections of its roughly one mile length, with a few spots that saw us climbing over downed trees or navigating through mud. Below is a brief video of Douglass Houghton Falls.

Rounding the last corner before the falls comes into view was a magical experience. The loud roar of the water rushing down the cliff drowns out any other noise in the area, and due to the remote location of this waterfall we had the whole area to ourselves. This is one of those Upper Peninsula places where you can sit for hours and soak in the scenery. Seeing how steep the cliff walls were here, it was hard to imagine that people used to get down here from above the falls. There’s definitely a lot of work to be done here before Douglass Houghton Falls will be open to the public! There is also an upper drop above this one, and we hope to finally be able to see that once this property opens up to the public. 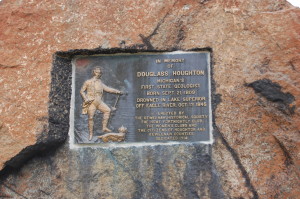 Douglass Houghton Falls, like many other things in the state, is named for former state geologist and explorer Douglass Houghton. In 1845 he drowned while working on a Lake Superior survey expedition. A memorial in Eagle River pays tribute to his legacy.