Browse: Home   /   Landmarks   /   Marshall’s “House With a Clock in Its Walls” Was Inspiration for a Book and Movie 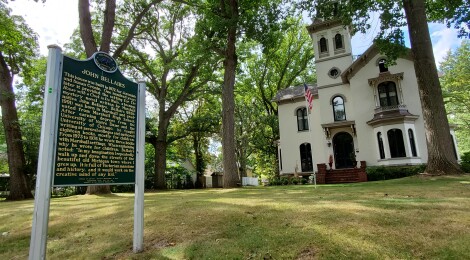 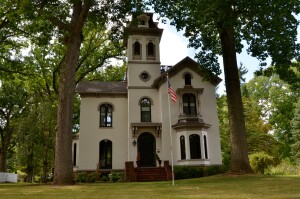 As we have previously profiled, Marshall is home to many beautiful and historic homes and buildings. On one of our first visits to the area, we toured the downtown area looking at the Michigan historical markers. One of the historic homes that stood out was the Jeremiah Cronin house on North Madison, which we learned had been the inspiration for a novel in the 1970s. It recently got even more attention with the 2018 release of a film based on the novel. Marshall’s “House With a Clock in Its Walls” is definitely worth checking out if you visit the area! 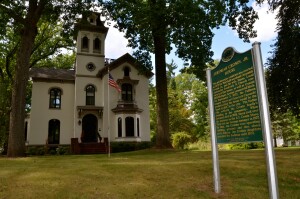 There is a two-sided Michigan historical marker in front of the house. The first side tells about Jeremiah Cronin, the man the house was built for: “This picturesqe residence was erected in 1872 for Marshall merchant Jeremiah Cronin. Jr., and his wife Susan. Local contractor Frederick N. Church constructed this house as well as Cronin’s 1869 Michigan Avenue commercial block. On September 5, 1872, the Calhoun County Patriot and Democratic Expounder predicted that the house would be the “most stylish” in the city. The Italian villa reflects the Cronin family’s standing in the community. When Jeremiah died in 1889, Susan took over the business as the S.E. Cronin Store. Their son Jay became manager in 1907. By then, the Cronins were operating clothing, grocery and shoe stores and a bakery. Jay Cronin’s daughters operated the business until 1974.” 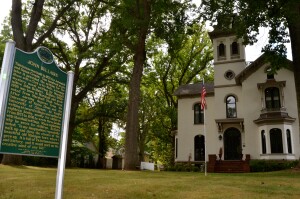 On the other side of the marker we learn about author John Bellairs: “This house was built in 1872 for Jeremiah and Susan Cronin. One hundred years later it provided the setting for The House with a Clock in Its Walls. a teenage mystery novel written by Marshall native John Bellairs. Bellairs (1938-1991) was born in Marshall and graduated from Marshall High School. After earning degrees from the University of Notre Dame and the University of Chicago, he taught writing at several colleges and authored eighteen books, mostly for children. From 1973 to 1976 he wrote three books with Marshall settings. When explaining why he wrote for children, Bellairs noted: “In my imagination I repeatedly walk up and down the streets of the beautiful Michigan town where I grew up. It is full of Victorian mansions and history, and it would work on the creative mind of any kid.”