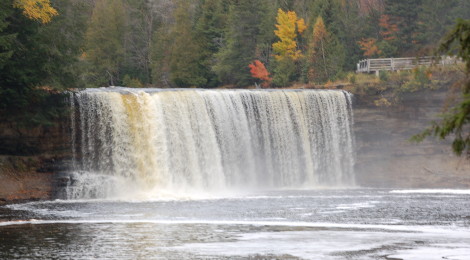 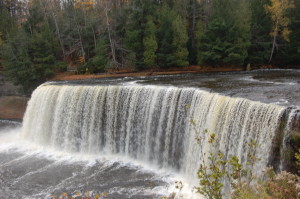 The spring and summer travel seasons will soon be here, and thousands of visitors will flock to Michigan state parks each week. One of the Upper Peninsula’s most popular state parks is Tahquamenon Falls State Park, an amazing collection of waterfalls that includes one of the largest drops east of the Mississippi. With more than 46,000 acres of land, this is Michigan’s second largest state park. It features a store and restaurant/brewery at the Upper Falls unit, and campgrounds at the Rivermouth unit and the Lower Falls portion of the park. In an earlier post we showcased the Lower Falls, which surround an island in the Tahquamenon River that you can get to by renting a rowboat. We also focused on the Upper Falls in a different post, where we touched on what gives the water its coloring and just how big of a drop the river makes there. While this area is incredibly popular in the summer, as you can see below a fall visit can bring a memorable experience as well. The park can be found on M-123 between Newberry and Paradise, and it is a drive of less than two hours from Sault Ste. Marie.

Other nearby attractions include Oswald’s Bear Ranch in Newberry, Whitefish Point Light Station and the Great Lake Shipwreck Museum in Paradise, Crisp Point Lighthouse (about 15 miles of driving on back roads to the Lake Superior shoreline), and the state forest campground and day-use area at the mouth of the Two Hearted River. Lodging is available in Newberry and Paradise, and there are many state park and state forest campgrounds that make for great base camps for a Tahquamenon and surrounding area adventure – Muskallonge Lake State Park is one of our favorites.