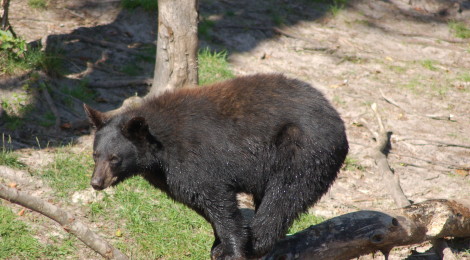 One of the more unique attractions in the Upper Peninsula, Oswald’s Bear Ranch gives visitors to the area the chance to get up close and personal with more than 20 bears. The bear ranch doesn’t do a ton of advertising, and most of their business comes from word of mouth. Until a few years ago, I had never stopped despite being in the area at least once a year. I have now been there twice, and have sent handfuls of friends and family there as family. A $20 per car fee gets you in, and the fun starts from there.

Some of the habitat areas have “photo holes,” while others have viewing platforms – making it easier to get pictures that don’t include the fence. There are two habitats for female bears, one for males and another for juvenile bears (who seem to be the most active).

The area for the juvenile bears features a waterfall and a pond as well as a lot of roam for the young bears to roam around.

Among the male bears in one of the larger habitats are the two biggest bears at the ranch – the one directly below tops out at 650 pounds, while the black one in the second photo below can’t be far behind but struggles with arthritis. They’re also among the oldest bears on hand.

I took this photo when we visited in 2013, and was quite surprised to see it featured in a brochure promoting attractions of the Eastern Upper Peninsula when we visited Fayette in the summer of 2014.

The owners and family are always on hand, full of knowledge and willing to share information on the bears. An added attraction is the chance to have a photo taken with one of the cubs they have, for an additional $10. This was shut down a little over a year ago, but a recent law amendment passed by the Michigan Congress has once again made it an option for visitors to experience this unique experience (though it is now under fire federally).

All of the bears here are “rescues,” and they are all well-cared for and well-fed here rather than being put down when found out in the wild. This is a great place to bring kids, and gives you a chance to get up close and personal with one of Michigan’s largest mammals in a safe and controlled environment. There is also a gift shop for those interested. See the links below for hours of operation and news: