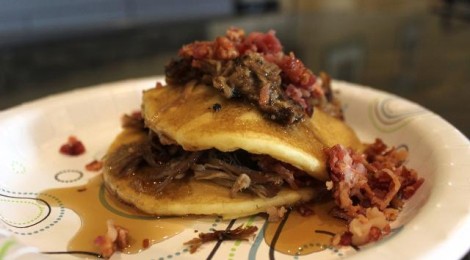 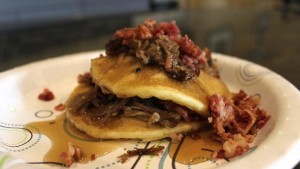 If you’ve never been to Fifth Third Ballpark in Grand Rapids, home of the West Michigan Whitecaps, you’re missing out on some great baseball and also some amazing ballpark food. Each year, the team holds fan submissions for new food items and puts one item on its menu for the season after a fan vote. This contest has led to some wild food creations. The team also has other creations, including the internationally known Fifth Third Burger. Today, we take a look at the new creations and some old favorites for the 2015 season.

The newest addition to the 2015 food menu is the Joey Pankakes, named for one of the team’s newest players whose real name is Joey Pankake. The new food creation comes with two layers of pancakes with alternating layers of hickory flavored pulled pork and bacon, all topped with a generous helping of syrup. The Joey Pankakes will be available at the Sweet Meats concession stand by the third base concourse.

Pankake is a 2014 seventh round draft pick of the Detroit Tigers. He hails from South Carolina and will play an infield position for the Whitecaps this season. Pankake’s name appeared on a Yahoo list of the ten best 2014 MLB Draft names.

Other new items for 2015 at Fifth Third Ballpark include Pretzel Coated Sausage, Oreo Churros, Deep Fried Nutella, Chicken and Steak Quesadillas, Chicken and Waffle Bites, and Chitown Corn. The Nutella Poppers were recently featured on Buzzfeed. Nutella Poppers came in at #13 on a list of “14 Gloriously Disgusting Stadium Foods You Deserve to Eat”. 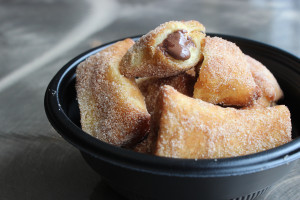 Another reason to visit Fifth Third Ballpark is to take on the Fifth Third Burger Challenge. Created six years ago, the colossal burger contains five 1/3 lb. burgers topped with chili, chips, and other layers of unhealthy food. The 4800 calorie burger is part of an eating challenge. Contestants that can eat the burger by themselves get a free t-shirt and their photo on the wall.

The Fifth Third Burger gained national notoriety at the time of its release. The burger also rose to fame when it was featured on the second season (see video) of Adam Richman’s Man vs. Food television show. In a visit to Fifth Third Ballpark July 15th 2009, Richman threw out the first pitch and took part in the Fifth Third Burger challenge. In two and a half innings, Richman became the 157th person to complete the challenge.

Beyond food, Fifth Third Ballpark is hoping its new beverage selection helps lure some fans in. The team will unveil the Craft Clubhouse for the Whitecaps 2015 season. Brought to you by Founders, a leading Michigan brewery in Grand Rapids, the walk in beverage stand will feature 16 local craft beers. The area is located near the third base concourse. The initial 16 beers at Craft Clubhouse are:

The Craft Clubhouse will also feature mixed drinks and wine, for those looking for something instead of local craft beers. Be sure to also check out the Craft Clubhouse for 2015 fan food creation finalist Beer-a-Misu. The tem features a scoop of tiramisu gelato topped with craft beer. The dish finished in a tie for fifth place with 11% of the fan vote, but ended up on the menu thanks to the team’s focus on craft beer this season. 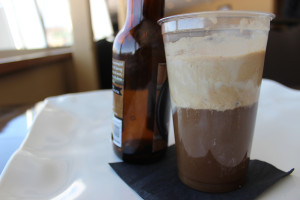 The West Michigan Whitecaps are the Class A affiliate of the Detroit Tigers. The team opens their season Thursday April 9th, dependent on the weather.