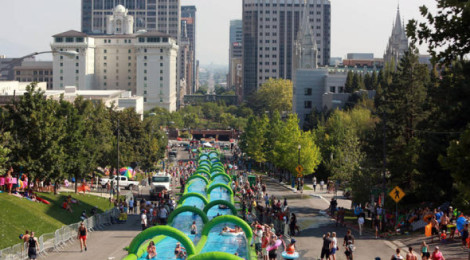 Spring is here, which means summer is right around the corner. That means pool and water slide weather and a Salt Lake City company wants to bring that outdoor fun to the streets of several Michigan towns. Slide the City brings its giant padded slip n slides to cities across the country, offering the world’s longest water slide for people throughout the summer months.

A visit to Slide the City’s website currently lists the following Michigan cities as coming soon:

There are no dates listed and none of the cities have been officially booked. However, pre-sale tickets are already available for sale, suggesting the cities will be added to summer 2015 or summer 2016 lineups.

The portable slides are 1000 feet long, or the length of three football fields. The company’s motto is “get ready for the slide of your life”. The experience is described as “family friendly slip-and-slide water party event”. Slide the City offers live music, food, drinks, and activities to go along with the slides. The slide is heavily padded and the company even goes as far as saying there is “more cushion that your grandpa’s orthopedic sneakers”. For more, check out this video preview. 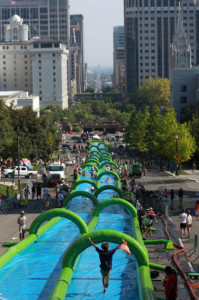 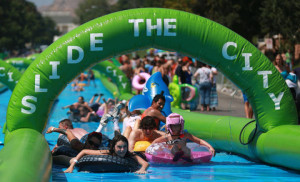 If the water slide idea sounds familiar, you may remember when Grand Rapids hosted the giant outdoor water slide on Lyon Street. That slide was 500 feet, or half the size of this one. That slide also caused some outlash from the city, as organizer Rob Bliss incurred $20,000 in debt due to police overtime and city services. SpringHill Camps bought that slide for $9525.

Slide the City may be a new name to Michigan residents, but some of the company’s other properties have been used in the state. The company also owns The Dirty Dash, Color Me Rad, and Lantern Pass. Color Me Rad is one of several color run brands that offers races with exploding color packets throughout the run. The company held a Grand Rapids event in 2013 and has events scheduled this year in both Detroit (May 9, 2015) and Lansing (April 11, 2015). Lantern Pass currently lists Grand Rapids as one upcoming location, with an October 3rd event at Berlin Raceway.

With no official dates set, I have to believe that the event won’t be held in 2015 at all five Michigan cities. I think we will see more details soon on any that plan to be held this year, but the rest will be pushed to the 2016 summer season. Whether this year or next, this is an event that bears watching and you don’t want to miss out on.