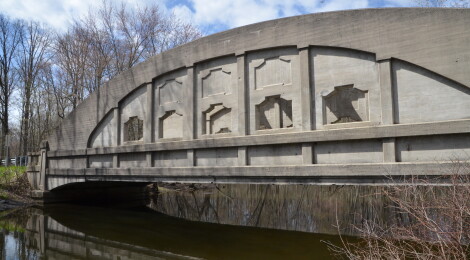 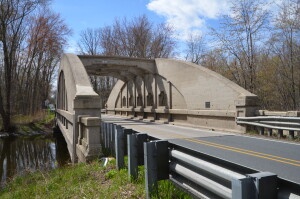 Spend any amount of time driving Michigan’s highways or back roads and you’re likely to cross a few historic bridges. In a state where you’re never more than six miles from a body of water, it comes as little surprise that structures of various shapes and sizes have been erected to aid in the crossing of rivers and streams. The Pine Island Drive Bridge in Algoma Township is one of our state’s surviving historic bridges, and easy to visit as it is just a few miles from Rockford in Kent County. The bridge crosses the Rogue River, and a Michigan state historical marker placed in 2012 tells about its historic significance. 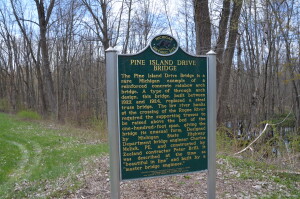 “The Pine Island Drive Bridge is a rare Michigan example of a reinforced concrete rainbow arch bridge. A type of through arch design. this bridge, built between 1922 and 1924, replaced a steel truss bridge. The low river banks at the crossing of the Rogue River required the supporting trusses to be raised above the bed of the one-hundred-foot span, giving the bridge its unusual form. Designed by Michigan State Highway Department bridge engineer Charles Melick, PE, and constructed by Zeeland contractor Peter Brill, it was described at the time as “beautiful in line” and built by a “master bridge engineer.” 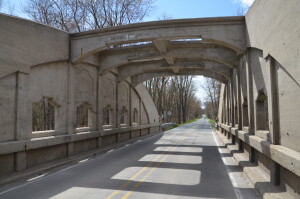 Keen observers may notice some similarities between this and other area bridges, and historicbridges.org describes it as a “custom-designed adaptation of Michigan’s unique concrete camelback bridges into a 100 foot span.” In 2014 the Kent County Road Commission did a thorough cleaning and rehabilitation of the bridge, which should keep it standing strong for years to come. The easiest way to reach the bridge is to take exit 97 off of U.S. 131, head west on 10 Mile Rd. to Pine Island Drive, then head north to the bridge. 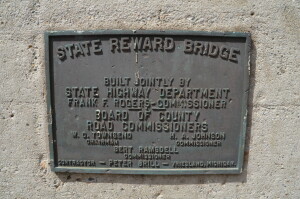 To see more of Michigan’s historic bridges, head over to our Bridges of Michigan landing page. We’ve also featured some of the state’s easy-to-visit covered bridges in a separate post. Other historic Kent County bridges include the Sixth Street Bridge in downtown Grand Rapids and the Fallasburg Covered Bridge in Lowell. The Pine Island Drive Bridge is one of only 16 bridges in Michigan to be honored with a state historical marker.