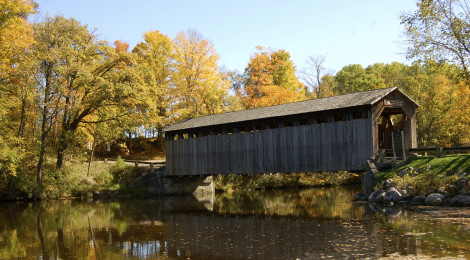 Only 15 minutes from Grand Rapids are two of the state’s six remaining historic covered bridges (and the site/remains of a third), a well-preserved look at early roadways and river crossings. One of them is still open to vehicle traffic, and all three have small park/observation areas next to them, as well as Michigan Historical Markers detailing their history and importance. The first, and closest bridge, is the Ada Covered Bridge, now open only to foot and bicycle traffic.

Now the centerpiece of a small park and baseball field this bridge can be reached by taking M-21 towards Lowell, turning onto Thornapple River or Ada Dr. and following brown signs for the covered bridge.

The historical marker provides details of the bridge’s history and importance to the area:

From Ada, head back to M-21 and continue east towards Lowell. Just before entering downtown Lowell, turn left on Hudson St. (which becomes Lincoln Lake Ave) and take it about two miles out of town until you see a sign on the right for Fallasburg Park and the covered bridge (Fallasburg Park Rd). Following this road about a mile, and taking the right fork when directed to, will put you at a picturesque setting and another beautiful covered bridge:

A small park here showcases the bridge, the slow-moving calm river, and usually a handful of geese. This bridge is still open to vehicle traffic, although a sign states there is a “$5 fine for driving any faster than a walk.”

After crossing the bridge there are several more historic markers and historic buildings from the early settling of Fallasburg, including a school:

The Fallas house, just on the other side of the bridge, traces roots back to the 1840s:

The site of the third and final bridge can be reached by continuing on Covered Bridge Rd., taking McPherson Street east, then Whites Bridge Rd north to the river. In 2013, this bridge was destroyed by a fire (arson). Efforts are currently underway to raise funds to rebuild the bridge, here is what it looked like in the fall of 2012:

Once again a historical marker gives the history of the covered bridge, as well as a bit about the early history of Ionia County.

It is possible to visit and view all three of these locations in an hour or more’s time, and there really isn’t a bad time of year to photograph the two remaining bridges – fall being a favorite. Local historical societies have done a great job of preserving these landmarks for future generations, providing a link to the time of pioneer settlers and stagecoaches.