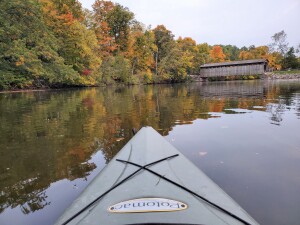 Few wooden covered bridges remain in Michigan, and very few of those that remain (four by our count) are open to vehicle traffic. The Fallasburg Covered Bridge north of Lowell was built in 1871 and celebrates a monumental anniversary in 2021. It is Michigan’s oldest covered bridge still in its original location, and the oldest covered bridge in Michigan still open to vehicle traffic. This has become one of favorite places in Kent County over the last ten years, and it is often part of our kayak trips on the Flat River. The bridge has also become a favorite location for fall color photography. As we look ahead to the bridge’s 150th anniversary, we’ll be sharing some of our favorite photos of the bridge and giving you some reasons to visit. 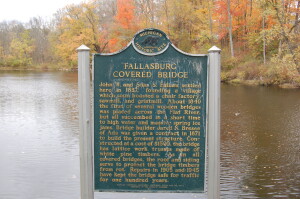 The Michigan historical marker by the bridge gives a brief summary of its history: “John W. and Silas S. Fallas settled here in 1837, founded a village which soon boasted a chair factory, sawmill, and gristmill. About 1840 the first of several wooden bridges was placed across the Flat River, but all succumbed in a short time to high water and massive spring ice jams. Bridge builder Jared N. Bresee of Ada was given a contract in 1871 to build the present structure. Constructed at a cost of $1500, the bridge has lattice work trusses made of white pine timbers. As in all covered bridges, the roof and siding serve to protect the bridge timbers from rot. Repairs in 1905 and 1945 have kept the bridge safe for traffic for one hundred years.” Bresee had previously built a covered bridge in Ada in 1867. The Fallasburg Covered Bridge is also on the National Register of Historic Places. 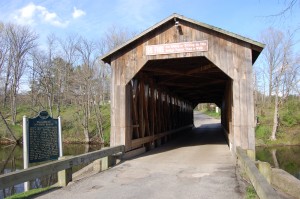 The Fallasburg Covered Bridge is a Brown truss bridge that is 100 feet long. The bridge has an interior width of 14 feet and an interior clearance of 12 feet. It carries Covered Bridge Rd. over the Flat River. The surviving buildings of the Fallasburg village can be found to the east of the bridge. The Fallasburg Historical Society continues to reserve these buildings and has many historical records and photographs from when this was a more populated area. 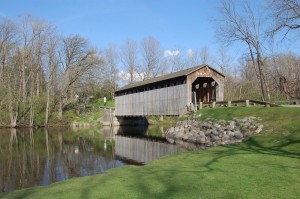 Repairs to the bridge have taken place in 1905, 1945, and 1994 and have helped it survive while also still maintaining its historic integrity. In 2013, a cement truck damaged it while attempting to drive across and ignoring the three ton weight limit. A sign at either end of the bridge informs visitors that there is “$5 fine for riding or driving on this bridge faster than a walk.” 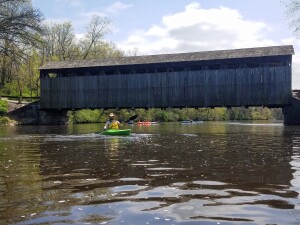 The Ackley Covered Bridge in Greenfield Village is older than the one in Fallasburg, but has been moved from its original location. The Ada Covered Bridge was rebuilt in 1980 after a fire. White’s Bridge, just a few miles upriver, was built in 1869 but destroyed by arson in 2013. A new bridge was constructed and opened to traffic in 2020. The other Michigan covered bridges that are open to vehicle traffic are the new White’s Bridge, Zehnder’s Holz Brucke bridge in Frankenmuth, and the Langley Covered Bridge in St. Joseph County. 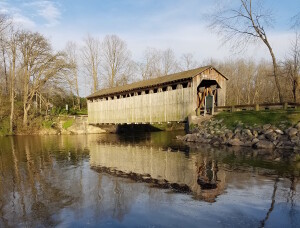 Keep an eye on the Fallasburg Historical Society Facebook page for upcoming celebrations. Below you will find a few more of our favorite pictures of this Michigan landmark. 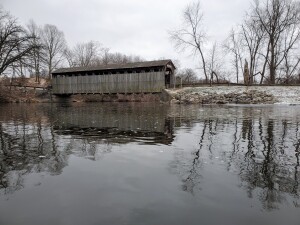 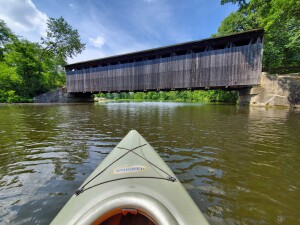 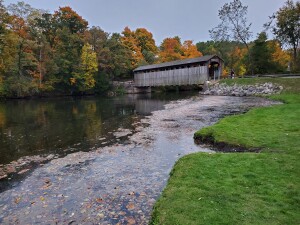 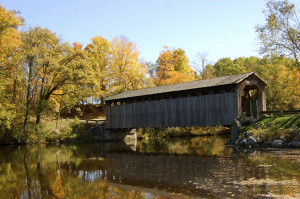 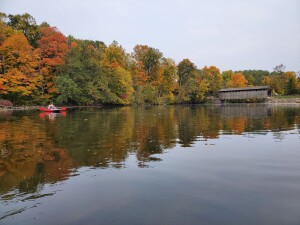 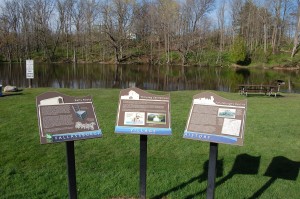 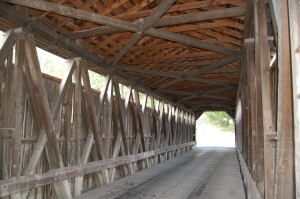 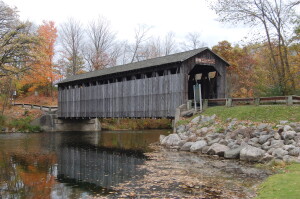 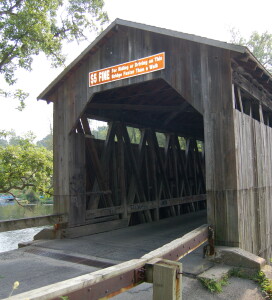 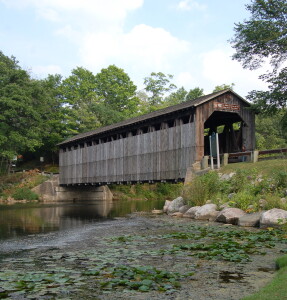