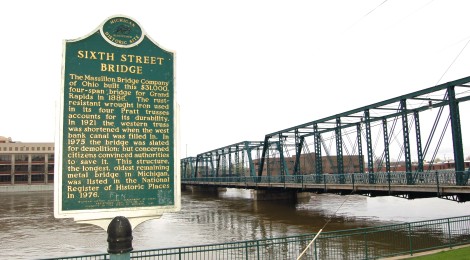 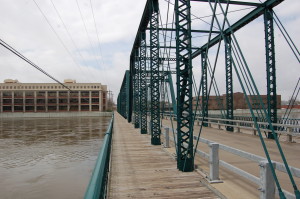 Downtown Grand Rapids, Michigan had many bridges that carry vehicles and/or pedestrians across the Grand River. The Sixth Street Bridge is not only one of the more picturesque bridges, it also has a great deal of historic significance and continues to carry pedestrian and vehicle traffic today even though it was built in the 1880s. You can get great views of the Grand Rapids city skyline from on the bridge, and the neighboring Sixth Street Bridge Park is a great spot for a picnic or relaxing stroll along the river. 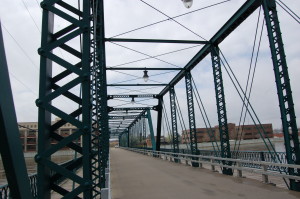 The Michigan historic marker located near the sidewalk reads: “The Massillon Bridge Company of Ohio built this $31,000, four-span bridge for Grand Rapids in 1886. The rust-resistant wrought iron used for its four Pratt trusses accounts for its durability. In 1921 the western truss was shortened when the west bank canal was filled in. In 1975 the bridge was slated for demolition; but concerned citizens convinced authorities to save it. This structure, the longest, oldest remaining metal bridge in Michigan was listed in the National Register of Historic Places in 1976.” 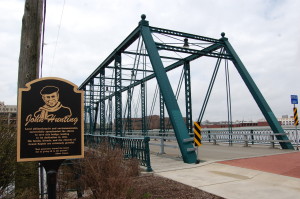 A small plaque next to the bridge honors John Hunting, a “local philanthropist and environmentalist who successfully spearheaded the efforts to save this bridge, leading to its dedication in 1981. His family, friends, and the citizens of Grand Rapids are extremely grateful.” 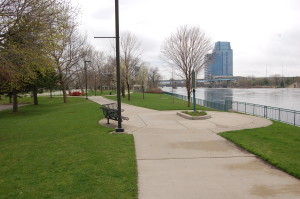 Some of Michigan’s other historic bridges include: