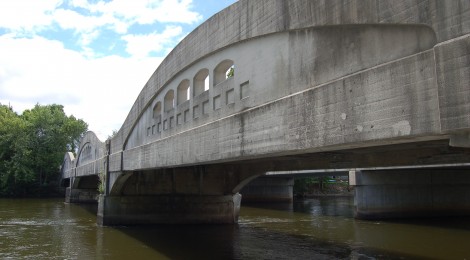 We’ve featured a handful of historic Michigan bridges over the past year here at Travel the Mitten. Today we take a look at the Mottville Bridge, the longest reinforced concrete camelback bridge in the state. This bridge used to carry vehicle traffic on US-12 over the St. Joseph River and now it is open for pedestrian traffic. A two-sided Michigan historical marker at the site gives more information on the construction of the bridge: 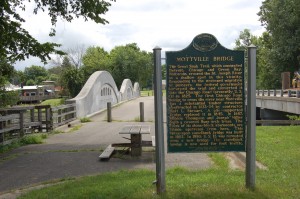 The Great Sauk Trail, which connected Detroit, Chicago, Green Bay, Wisconsin, crossed the St. Joseph River at a shallow spot in this vicinity. Responding to the westward migration of pioneers, the federal government surveyed the trail and converted it into the Chicago Road (presently U.S. 12) in 1825. The first Chicago Road bridge to cross the river near Mottville was a substantial timber structure constructed in 1833-34 by contractor Hart L. Stewart. A pile supported bridge replaced it in 1845. In 1867, Mahlon Thompson and Joseph Miller built a covered Burr arch truss. The ruin of its stone-block abutments are visible upstream from here, This three-span camelback bridge was built in 1922. In 1990 U.S. 12 was rerouted over a new bridge. The camelback bridge is now used for foot traffic. Constructed in 1922, this three-span, 270-foot-long bridge is the longest Michigan example of a reinforced concrete camelback bridge. These bridges are found primarily in Michigan and Ontario, Canada and the Mottville Bridge is an excellent example of this design. It was built by contractors Smith and Nichols of Hastings under the direction of State Bridge Engineer C.A. Melick. The Michigan State Highway Department pioneered the use of standardized designs for concrete bridges. By the early 1920s the department had established standardized plans for camelback spans of 50, 60, 70, 75, and 90 feet. This bridge contains three identical 90-foot spans. It was preserved by the Michigan Department of Transportation when the present U.S. 12 bridge was erected. 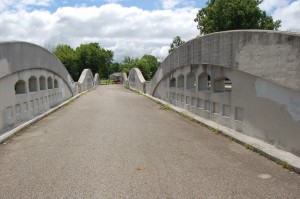 Some of the other historic bridges we’ve featured include: