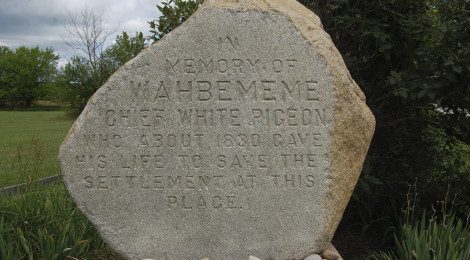 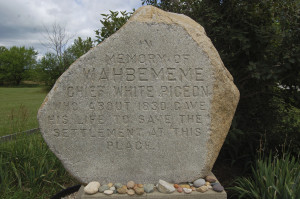 The small southwest town of White Pigeon gets its name from the legendary Potawatomi chief Wahbememe, and they have honored his memory with the Chief Wahbememe burial site and marker along US-12. The story of White Pigeon is that while at a meeting of chiefs in Detroit, he heard of plans to attack the settlement. As a friend to the settlers, he chose to run the entire distance back to warn them of the coming attack. He died of exhaustion shortly after, and 1909 funds were raised to honor his memory with the stone marker here. A two-sided Michigan historical marker was added in 2000. 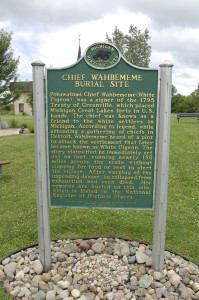 Potawatomi Chief Wahbememe (White Pigeon) was a signer of the 1795 Treaty of Greenville, which placed Michigan Great Lakes forts in U.S. hands. The chief was known as a friend to the white settlers in Michigan. According to legend, while attending a gathering of chiefs in Detroit, Wahbememe heard of a plot to attack the settlement that became known as White Pigeon. The story states that he immediately set out on foot, running nearly 150 miles across the state without stopping for food or rest to alert the village. After warning of the impending danger, he collapsed form exhaustion and soon died. His remains are buried on this site, which is listed in the National Register of Historic Places. 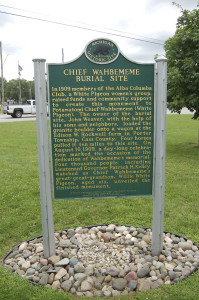 In 1909 members of the Alba Columba Club, a White Pigeon women’s group, raised funds and community support to create this monument to Chief Wahbememe (White Pigeon). The owner of the bural site, John Weaver, with the help of his sons and neighbors, loaded the granite boulder onto a wagon at the Edison M. Rockwell farm in Porter Township, Cass County. Four hourses pulled it ten miles to this site. On August 10, 1909, a day-long celebration marked the occasion of the dedication of Wahbememe’s memorial. Four thousand people, including Lieutenant Governor Patrick H. Kelley watched as Chief Wahbememe’s great-great-grandson, Willie White Pigeon, aged six, unveiled the finished monument.

This historic site is located at the intersection of US-12 and US-131 in White Pigeon in St. Joseph County.