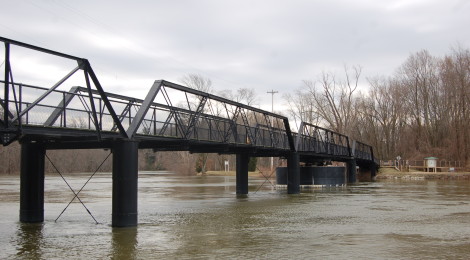 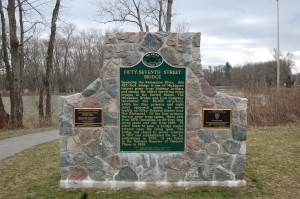 Allegan County is home to two of the state’s most historic bridges – the Second Street Bridge in Allegan and the 57th Street Bridge (also known as the New Richmond Swing Bridge) in Manlius Township. The latter has history dating back to the 1870s, a time when boaters could navigate the Kalamazoo River from Lake Michigan. It is believed to be the oldest surviving swing bridge in the country, and is one of Michigan’s oldest and longest truss bridges. 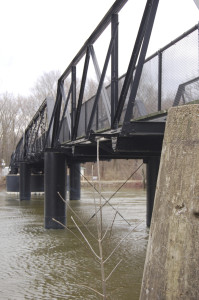 The length of the entire bridge is more than 420 feet, with the intriguing feature being a swing span that was manually operated until the 1920s. Although the bridge was closed to vehicle traffic in 1997, it is now open for pedestrian use and is part of the New Richmond Bridge Park. A Michigan historical marker at the site provides the history of the area, and there is also a plaque for the bridge being on the National Register of Historic Places. The text on the Michigan marker reads as follows:

Spanning the Kalamazoo River, this 422-foot bridge is one of Michigan’s longest pony truss highway bridges and among the oldest surviving swing bridges in the United States. The Milwaukee Bridge and Iron Company fabricated the $5,000 structure which has four primary and eight short approach spans, to serve traffic on Fifty-Seventh Street near New Richmond. Of the four primary Warren pony truss spans, three date from 1879 (including an 89-foot long swing span) and one from 1899. To allow boats to pass, a bridge tender rotated open the swing span. The bridge was closed to motor vehicles in 1997 and rehabilitated for use by pedestrians in 2003. It was listed in the National Register of Historic Places in 1998. 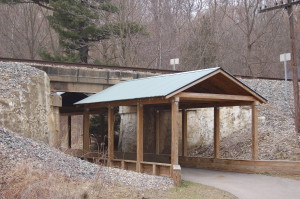 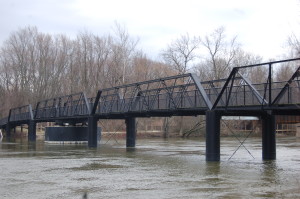