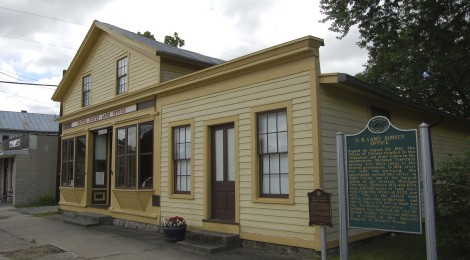 White Pigeon may be a small village of 1,500 residents today, but it was once the site of a busy and important land office. The land office is the oldest surviving one in Michigan, and one of the oldest buildings in southwestern Michigan. The U.S. Land Office here registered claims to what would become Grand Rapids, Kalamazoo, and Battle Creek. Louis Campau and Lucius Lyon were among the first to receive land patents here and would become well-known figures in early Grand Rapids.

A Michigan historical marker here gives a bit more history on the office: “Signed on August 29, 1821, the Treaty of Chicago resulted in the Potawatomi and other tribes in southwestern Michigan Territory turning over their lands to the federal government. In 1831, after the land was surveyed, the government opened this offfice in White Pigeon, one of the largest towns in the western Michigan Territory. Between 1831 and 1834, some 260,000 acres of land were sold from this office at $1.25 per acre. This is the oldest land office remaining in Michigan, and one of only a few left in what was the Northwest Territory. The building was restored by the St. Joseph County Historical Society. It is listed in the National Register of Historic Places.” 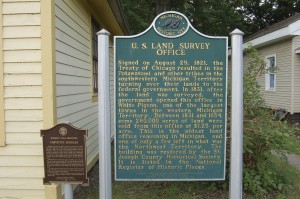 This site is also home to a Michigan Legal Milestones plaque placed by the State Bar of Michigan. Its text reads: “Standing on this site since Andrew Jackson was president of the United States, the building where the White Pigeon Land Office conducted business from 1831 to 1834 is one of the historic treasures of Michigan. From this building, title to much of the land in southwest Michigan was conveyed, made available for settlement by the 1821 Treaty of Chicago with the Pottawatomis and other tribes. Before it closed in 1834, the White Pigeon Land Office conveyed title to nearly 260,000 acres of land in southwest Michigan, including the land where Grand Rapids, Kalamazoo and Battle Creek now stand. White Pigeon was a frontier boom town in the 1830s, thanks to the Land Office and its position along the Sauk Trail (now U.S. 12), the only road then available for travel southwest from Detroit. The federal government offered the lands in southwest Michigan for $1.25 per acre, and demand was great, fueled by settlers and speculators entering Michigan after the opening of the Erie Canal. The legal record of the chain of title to the state’s lands conveyed out of the little land offices throughout the state was critical to the rapid but orderly growth of Michigan.” 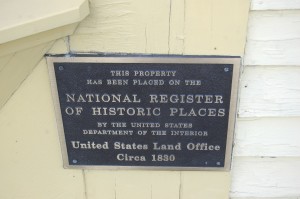 At the corner of US-12 and US-131 to the west of town is a memorial marker for Chief Wahbememe (White Pigeon), the namesake of the village.