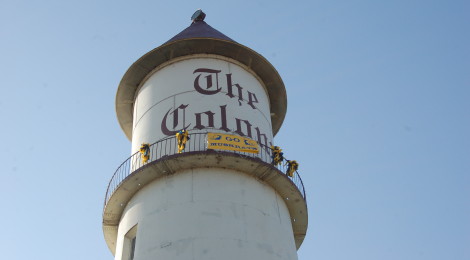 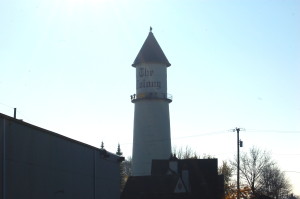 When driving along M-29 along the St. Clair River near Harsen’s Island, one landmark stands out above the rest. A tower more than 125 feet tall stands near the entrance to The Colony, a subdivision of homes that connect to a canal with access to the river. 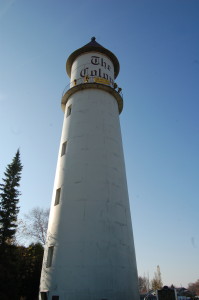 The Colony Tower has almost 200 years of history, and has thankfully been preserved. It was honored with a Michigan historical marker in 1993. The text on that marker reads:

Built in 1825 by the Chicago Bridge and Iron Works, this steel-framed water tower was the main water supplier for the “The Colony on the Ste. Claire”; – a secluded residential community established in Clay Township in the early 1920s. The Colony Tower marked the entrance to the Will St. John estate, the home of the real estate developer who founded The Colony subdivision. The 136-foot tower once housed a 60,000-gallon water tank. Constructed with curtain walls and steel plates to resemble a lighthouse, it demonstrates the early twentieth-century penchant for disguising the utilitarian functions of highly visible structures. A light shone from atop the tower, aiding boat and aircraft navigation from 1925 until 1937, when the light was extinguished due to its high operating costs. 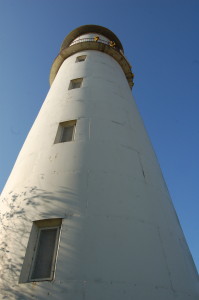 The tower can be found at 6503 Dyke Rd., and it can be seen from several locations nearby. This area is full of maritime history and much more – be sure to check out the monuments to Chris Craft in Algonac, Algonac State Park, Harsens Island and Marine City to the northeast.