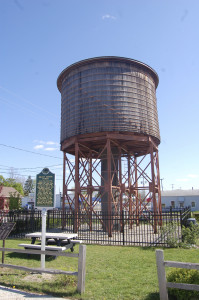 Last week we took a look at one of the few remaining wooden covered bridges in Michigan, and this week’s roadside attraction is also one of the last of its kind and made of wood. In Grant, a town of around 900 in Newaygo County, this wooden water tower was once vital to the railroad and later to the fire department in the area. The Michigan historic marker on site reads as follows: 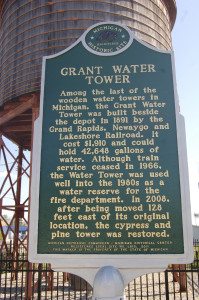 Among the last of the wooden water towers in Michigan, the Grant Water Tower was built beside the depot in 1891 by the Grand Rapids, Newaygo and Lakeshore Railroad. It cost $1,910 and could hold 42,648 gallons of water. Although train service ceased in 1966, the Water Tower was used well into the 1980s as a water reserve for the fire department. In 2008, after being moved 128 feet east of its original location, the cypress and pine tower was restored.

The water tower is easy to locate, you’ll find it at 100 Main St. in Grant.